Dede Carpenter (Katherine Marie) 12/20/59 – 6/7/2022 beloved wife of Jeff Carpenter. Anyone who knew Dede would smile at the thought of her. Her family and friends will deeply miss the ability she had to brighten any room she was in, make everyone she spoke to feel like they were her favorite person, and when it was time for her to leave, she exited with a quip and a smile. Dede grew up in Lincoln, NE with her mother Frances (Walker) Reinehr (1935-2013) and brother Daniel Reinehr (1957-2005). She spent most summers with her North Dakota family entertaining her cousins, aunts, uncles and grandparents. She trained as a surgical tech after high school (1978 grad) and worked with a group of women who she has stayed close to ever since. She used her training to work in multiple medical positions over the years, and used those skills in many other pursuits throughout her lifetime.

She met the love of her life at the age of 15, but didn’t realize it until later. Jeffrey Carpenter was a neighborhood boyfriend who circled back around and they were married in 1986. Their early years of marriage were spent living and working in Lincoln, but they wanted something more. Together they decided to purchase a lake resort in Minnesota in 1995. Dede’s zest for life , their combined hard work, and their love for each other made the resort flourish and became a haven of fun for many. Dede’s ability to make a person feel like a friend was truly a gift. Initially she worked at the Battle Lake Clinic while the resort was running. She then started to work at Battle Lake Schools in the off season as a para in Special Education, gaining respect and friendships of students and staff. She also began working on her teaching degree part time and began the bachelors program from Bemidji in 2013 while working full time. In 2015 she earned her degree and took her first teaching position in La Ceiba, Honduras. Dede and Jeff took on the next adventure together as they created a community of friends while she spent two years teaching 30 kindergarteners each year. The friendships they rooted there have continued to grow and remain after being separated by distance when she moved back to Minnesota to teach in Fergus Falls in 2018. She loved teaching children and felt it was a honor to follow in her mother’s footsteps. She expected a lot from her students because she could see their potential and helped them achieve it. She believed in the power of education.

Her health challenge began in early 2019. She was diagnosed with stage IV ovarian cancer. After the initial shock, she went fully into treatment, assuming a cure. She was in remission for well over a year when the numbers started worsening. Newer medications did not help and she decided that she had lived her best life, and continued to live it until she couldn’t. She was able to stay home with her husband Jeff and cousin Mary Jane Reiss until she joined the family of angels.

To know Dede was to love Dede and to be loved by Dede. She made the world more full light, color, creativity, joy, love and laughter. She shared those gifts generously to everyone she touched, and she touched more people than she would ever take credit for.

From a wall hanging in her bedroom: “I am going to make everything around me beautiful-that will be my life.” -Elsie de Wolfe

Celebration of Life for Dede Carpenter will be from 1-4 P.M., on Saturday, July 9, 2022, at the Glende-Nilson Funeral Home in Battle Lake. Bring your stories and photos if you wish to share. Refreshments will be served. The family encourages the friends of Dede to have smaller gatherings to remember her in their own special way. Dede was an amazing woman filled with life and powered by her unending curiosity which she pursued through the most wonderful and constant questions. 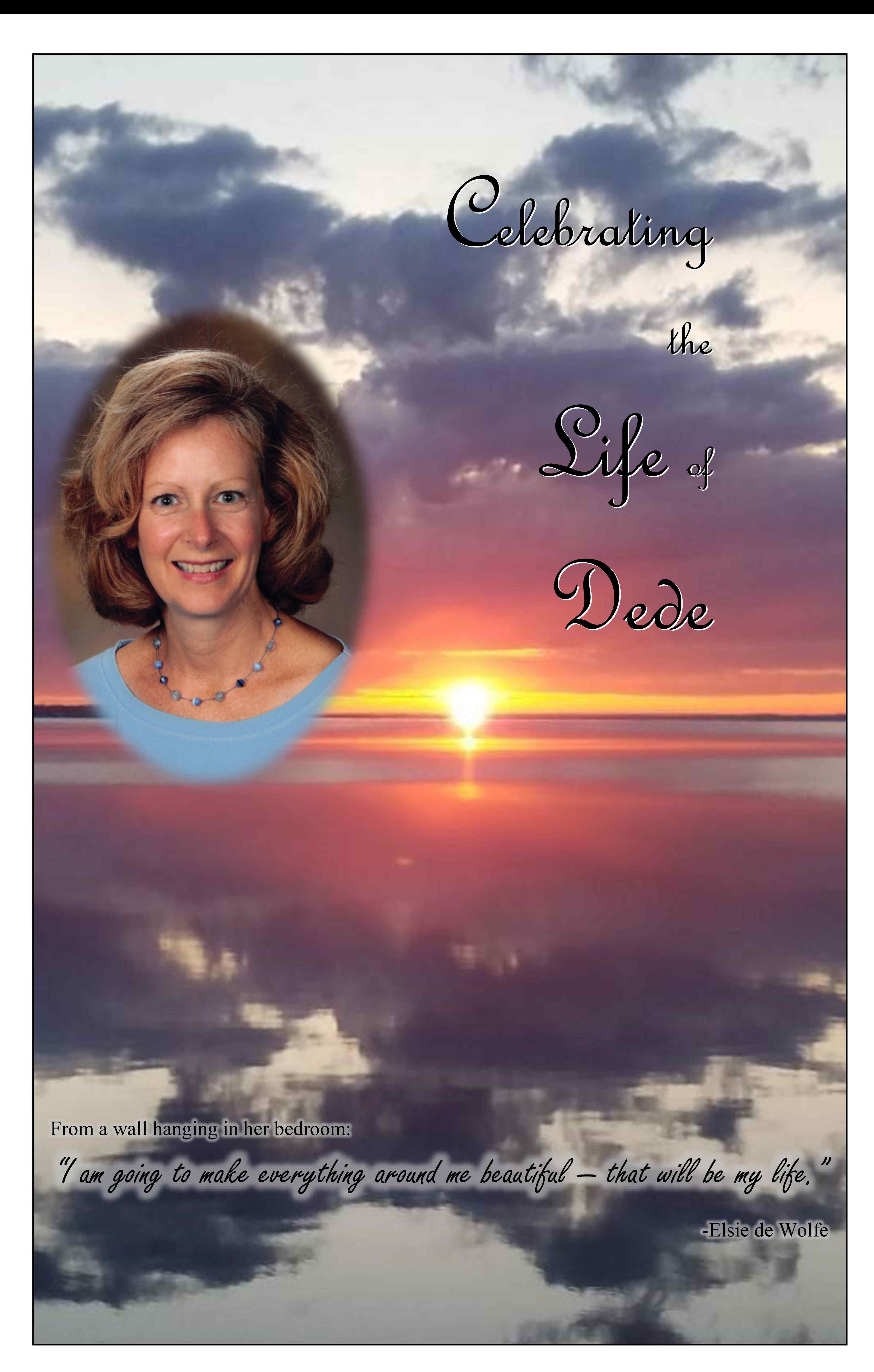 To send flowers to the family or plant a tree in memory of Dede (Katherine Marie) Carpenter, please visit our floral store.

A Memorial Tree was planted for Dede (Katherine Marie)