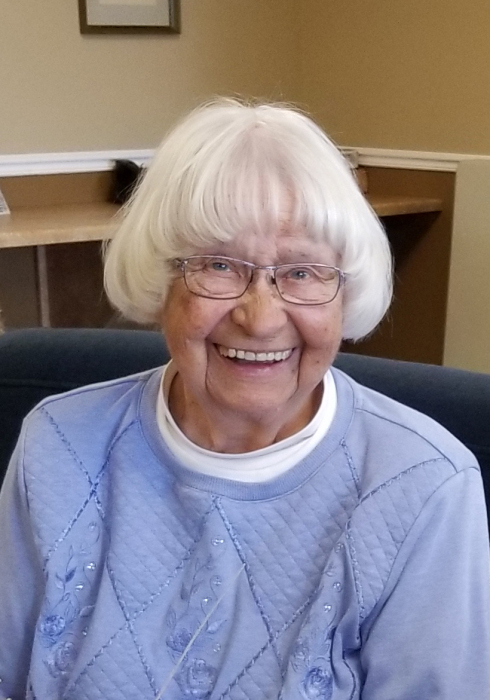 Virginia Mae Hanson was born March 3, 1930, in Fergus Falls. Her parents were Knute and Hannah (Sandberg) Hanson. She graduated from Fergus Falls High School in 1947, then went to Bethel College in St. Paul, and graduated from the University of Minnesota with a BS in Education. During that time, she met Ronald Stabnow. They married June 30, 1951, and a month later moved into their home on Holdt Street in Battle Lake. She lived there for 70 years until moving to Mill Street Residence in October 2021.

Ginny taught history, social studies, and physical education in Battle Lake. She also worked for her father, Knute Hanson, and helped him run his business service, assisted him in his role as secretary of the Otter Tail County Fair Board, and helped him clerk at Tysdal’s auction market. Later on she worked during tax season at H&R Block and M&S in Fergus Falls.

She had a poster that said, “I used to think somebody should do something. Then I realized, I am somebody.” Ginny met that challenge. She made the world a better and more beautiful place—including beautifying Holdt Street for many years with a line of red geraniums in her front yard.

Ginny was preceded in death by her parents, Knute and Hannah Hanson; her father- and mother-in-law, Julius and Mabell Stabnow; her husband, Ronald; and her son-in-law, Charles Fisher. She is survived by two sisters, Vynnette (Clinton) Perkins of Plymouth and Kathleen Costa (Eldon Eddy) of Northfield; three children, Jeff (Gay) Stabnow of Clitherall, Carrie Fisher of Battle Lake, and David (Bonnie) Stabnow of Nashville, Tennessee; two grandchildren, Kate Stabnow of St. Paul and Jessie Stabnow of Elizabeth, Colorado; one great grandchild, Sadie Stabnow of St. Paul; and several nieces and nephews.

A visitation will be held Friday, June 3, 2022 from 5-7 PM at the Glende Nilson Funeral Home in Battle Lake, Minnesota. There will also be a visitation held one hour prior to the service, from 1:00 - 2:00 PM at Battle Lake Alliance Church.

A celebration of life will be held Saturday, June 4, 2022 at 2:00 PM at the Battle Lake Alliance Church in Battle Lake, Minnesota, with a reception to follow. Burial will take place after the reception at Mount Pleasant Cemetery in Clitherall, Minnesota.

To order memorial trees or send flowers to the family in memory of Virginia Stabnow, please visit our flower store.