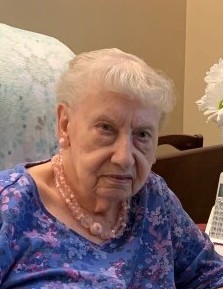 She was born on February 28, 1932 in the Wright Hospital, Fergus Falls, the daughter of Henry and Rose (Fyffe) VanHovel.  She was baptized in the First Baptist Church in Breckenridge and attended the Campbell Elementary and High School.

Verla and Delwin C. Ehlke were married on June 14, 1953 in the First Baptist Church in Campbell, MN.  Del was drafted into the U.S. Army, they lived in Ft. Riley, KS and El Paso, TX and Verla returned to Campbell when Del served in Germany.  Verla and Del lived in Campbell, then moved to Wendell where they lived until moving to Battle Lake in 1986.  Verla was a homemaker, who enjoyed raising her children.  She had worked at Mendelson Egg Plant in Elbow Lake, she sewed for three years with Rosenblatts, was employed for a short time with Medallion Kitchens, then ten years with Thom Linen, all of Fergus Falls.  Verla resided at Pioneer Care for the last six years.

Verla enjoyed flowers, gardening and yard work.  She did a lot of sewing and craftwork for her family and sewed a lot of her children’s clothing.  In her later years, she enjoyed coloring.  Verla enjoyed her family and especially her grandchildren and great-grandchildren.  She was a devout Christian and wasn’t afraid to share her faith.  She had been a member of the Lawrence Presbyterian Church, Grace Evangelical Free Church of Elbow Lake, Bethel Lutheran Church and the Church of the Nazarene, both of Fergus Falls, the Christian and Missionary Alliance Church of Battle Lake and Stavanger Lutheran Church of rural Fergus Falls.

She is survived by five children: LaRae (George) Stebe of Fergus Falls, Jayne Cunningham of Milwaukee, WI, Julie McColm of Fargo, ND, Phil (Lezli) Ehlke of Bemidji, MN and Wayne (Barb) Ehlke of Aurora, CO; 15 grandchildren, 28 great-grandchildren and her brother, Kenton VanHovel of Fergus Falls.  She was preceded in death by her parents, her husband and her sister, Velma M. Angell.

To order memorial trees or send flowers to the family in memory of Verla Ehlke, please visit our flower store.