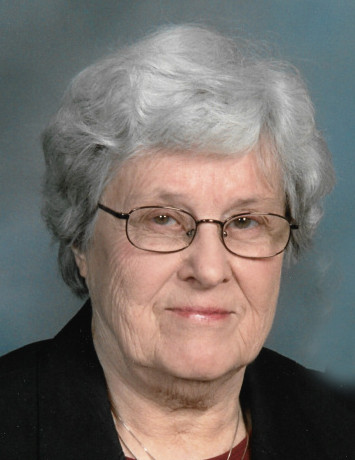 Valdine K. Roehl, age 93, a long-time resident of Orwell township, Fergus Falls MN passed away on May 7, 2022 at the Pioneer Cottages in Fergus Falls surrounded by her family.

Valdine married “the love of her life” Robert Roehl on February 12, 1950 at First English Lutheran Church.  Valdine and Robert lived for 50 plus years on their Roehling Acres farm west of Fergus Falls near French, MN.  At the beginning of their marriage, they operated a dairy and grain farm. Later they raised sheep, hogs, beef, small grains, sunflowers, corn, and soybeans before retirement in 1991. In 2000, they built a new home close to their farm. Together they raised seven successful well-educated children.

Valdine tended to a large garden to feed the family as well as raising chickens and gathering eggs. She had a special connection with animals, training the family dogs and rescuing cats. She had many creative outlets including sewing, knitting, painting and quilting.  Each child received a handmade quilt for their wedding and each grandchild received a quilt for high school graduation. Valdine enjoyed playing the piano and taking family photos. Valdine was active in her farm and church community.  She served in Orwell Homemakers, the kids’ schools and 4-H club and as a church volunteer. Valdine and Robert spent 20 plus years wintering in Edinburg, Texas.

Valdine was given exceptional care at Pioneer Cottages. Memorials may be directed to the PioneerCare Foundation, 1131 Maybelle Ave South Fergus Falls MN 56537.

Blessed be the memory of Valdine Roehl.

Visitation: 2 hours prior to the service.

To order memorial trees or send flowers to the family in memory of Valdine Roehl, please visit our flower store.