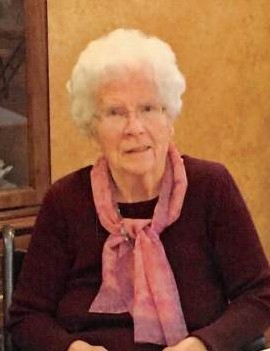 Tillie Holtberg of Evansville, died on August 16, 2018 at the Evansville Care Center, Evansville, Minnesota at the age of ninety-two years.

Tillie Holtberg was born December 16, 1925 in Fergus Falls, the daughter of Andrew and Anna (Larson) Bahle. She was baptized February 11, 1926 in Fergus Falls and confirmed at Pelican Lake Lutheran Church in Ashby on June 15, 1941. She attended school in Ashby and graduated from Ashby High School June 2, 1944 as Salutatorian of her class. She became an employee of First State Bank of Ashby for 2 ½ years after graduation.

Tillie married Dennis Holtberg September 22, 1946, at her sister Magna’s home in Ashby. They were married by Rev. B. Guldseth. To them three children were born: Judy, Roger and Allen.

In 1953, the family moved to Evansville, where they owned and operated the Evansville Meat Market. Tillie worked in this shop for 31 years. Dennis died on November 28, 1983.

Tillie was a member of Faith Lutheran Church in Evansville. She was Evansville City Treasurer for 28 years. She enjoyed her family and grandchildren and loved to do things for them. She enjoyed being with them and always said they grow up to fast.

She enjoyed her hobbies of having and attending garage sales and tending to her big yard in the summer. After retirement, Tillie enjoyed working at the Senior Center and was treasurer for a number of years.

Special thanks to the staff of Evansville Care Campus and Douglas County Hospice for their excellent care. Special appreciation to Tassie Satterlie McLean.

Funeral Service: 10:00 a.m., Monday August 20, 2018, at Faith Lutheran Church in Evansville with a visitation one hour prior to the service at the church.

To order memorial trees or send flowers to the family in memory of Tillie Holtberg, please visit our flower store.