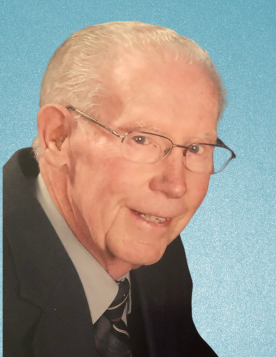 Terry Kambel passed away on August 24, 2022, at Serenity Assisted Living in Dilworth, MN, at the age of 89 years.

Terry Eugene was born on August 13, 1933, to Bernard and Agnes (Ryan) Kambel in Hitchcock, South Dakota. Terry grew up in Hitchcock and after graduating high school, he served in the Army for two years. Terry then returned to Hitchcock, marrying his high school sweetheart, LaVonne, at St. Martins Church in Huron, SD on November 19, 1955.

Terry and LaVonne celebrated 66 years of marriage. They had two children, Kerry and Kim, and lived in Redfield, SD, relocating to Long Prairie, MN in 1973. They also lived in Hinckley, Battle Lake, and eventually, Dilworth, MN. The majority of Terry’s career consisted of managing a lumber company, but he also managed a motel while living in Hinckley.  Terry semi-retired when he and LaVonne moved to Battle Lake in 1995.  Terry was very involved in the community, staying active with the Lions, Knights of Columbus and at Our Lady of The Lake Catholic Church.

Terry enjoyed hunting, fishing, and was an avid pinochle player.   He also enjoyed trips to the casino, playing bingo, times spent with friends at the Battle Lake Senior Center, and enjoyed watching the MN Twins and Vikings.

Family was important to Terry and he loved getting together for any occasion. Terry was quite the jokester, always good natured, teasing and laughing. One never knew what he was going to come up with.

The family would like to express their gratitude to all the caregivers at the Battle Lake Good Samaritan Center, Serenity Assisted Living, and Hospice of the Red River Valley. These caregivers exceeded all expectations and we will be forever grateful for the skilled and compassionate care they provided to Terry.

Mass of Christian Burial: 11 a.m., Tuesday, August 30, 2022 at Our Lady of The Lake Catholic Church in Battle Lake, with a visitation one hour prior to the service at the church.

Funeral arrangements are with the Glende-Nilson Funeral Home of Battle Lake for Terry Kambel.

To order memorial trees or send flowers to the family in memory of Terry Kambel, please visit our flower store.
Open