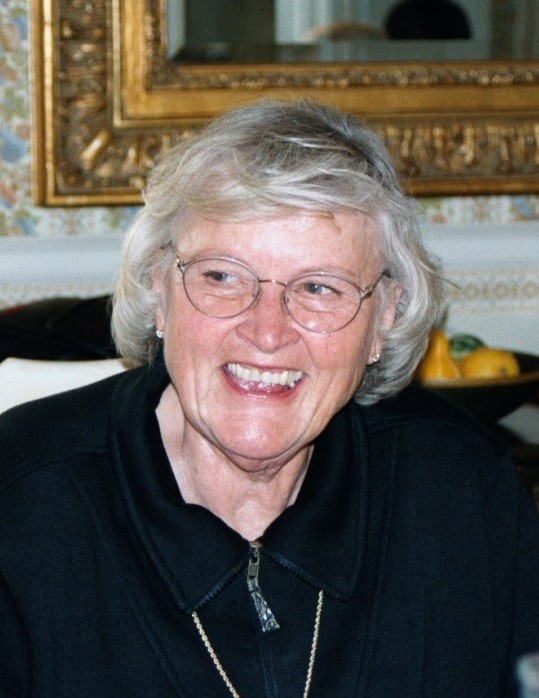 Shirley Ann Evenson was born on January 25, 1926 in Otter Tail County, Minnesota, the daughter of Elmer and Minnie (Enquist) Evenson. She attended school in Fergus Falls, and graduated from Fergus Falls High School in the class of 1944.

In 1947, Shirley married Rudy Haukebo at First Lutheran Church in Battle Lake. They originally settled in Fergus Falls where they were blessed with three boys, Jeff, Craig, and Kevin.

The family moved to Battle Lake in 1955 when Rudy took over the State Farm Insurance Agency. Shirley managed the agency office, located in their home, with great care and efficiency as was true for all she did. She once said, she never knew when she would turn around and find someone in the house to talk to Rudy about insurance.

Shirley was a welcoming and gracious hostess and enjoyed all aspects of homemaking from making sweet rolls on Sunday morning to decorating. She loved spending time with family and friends at the card table, on the golf course, on a boat, a snowmobile or bicycle. She enjoyed barbershop harmony and was part of the Otter Belles, who sang and did skits to everyone’s amusement. She was a long-time member of First Lutheran Church of Battle Lake, where she sang in the choir and served in various areas.

In 1983, Shirley married Douglas Dunker. They lived on West Battle Lake, enjoying pontoon rides, spending time on the deck and swimming—especially with grandchildren—and their Friday group. Shirley and Doug enjoyed traveling around the world during the off season. She had a lovely garden, which she enjoyed greatly, but hated tending.

Shirley was preceded in death by her parents; husbands, Rudy and Doug; and siblings, Gladys (Tudy), Vivian, Audrey, and Don.

The family wishes to thank Shirley's caregivers for the wonderful care while Shirley was at their facilities: the staff of Prairie Senior Cottages in Alexandria, the staff of Crystal Brook Memory Care Center in Park Rapids, and to the CHI St. Joseph's Hospice staff for their care during Shirley's final days.

A private family service will be held at 11:00 AM Wednesday, May 6, 2020, at Glende-Nilson Funeral Home in Battle Lake, with a live stream available online at www.GlendeNilson.com

In lieu of flowers, memorial contributions may be made to Knute Nelson Foundation for Crystal Brook Senior Living, Park Rapids, Minnesota.

Please visit www.GlendeNilson.com to share an expression of sympathy with Shirley’s family.

To order memorial trees or send flowers to the family in memory of Shirley Dunker, please visit our flower store.