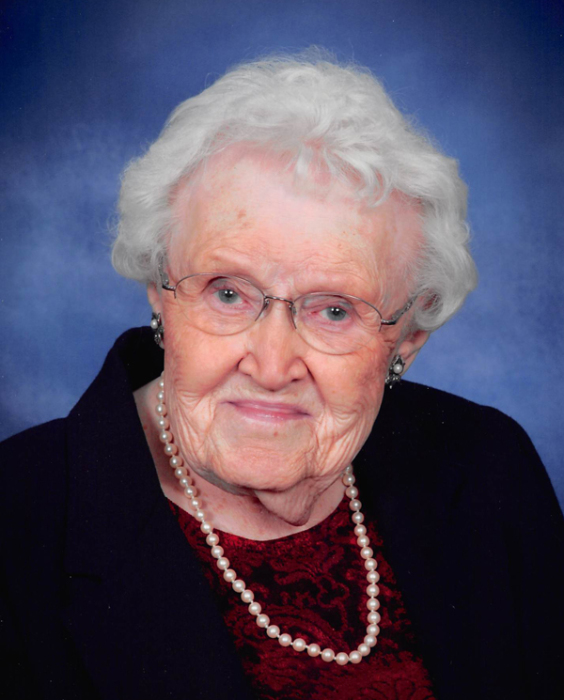 Sally was born October 6, 1917 at the family home in Oscar Township, Otter Tail County, MN to Clemens and Olophine (Hagen) Rian. She was baptized at home and confirmed at Friborg Lutheran Church, rural Rothsay, MN. She attended rural schools through the 8th grade and one year at Pelican Rapids High School after which she was needed to help at home. She obtained her G.E.D. in 1966.

On June 18, 1950, Sally married Chester Swendsrud at her sister’s home in rural Rothsay. They lived on the Swendsrud farm near Dalton, MN. Together they had one son, Jerry. Chester died in a farm accident in 1953 after which she and Jerry moved to Rothsay and lived there until 1970 when she moved to Fergus Falls. In August of 2017, she moved to LB Broen Home where she received excellent care until the end of her life.

Sally did housekeeping, was a Cub Scout leader, worked at West Central Turkeys in Pelican Rapids and trained and worked as a home health aide for a few years. In 1970, she became the first head housekeeper at the newly opened Holiday Inn in Fergus Falls, working there until her retirement in 1982.

She was active in the churches she attended, teaching Sunday School and Vacation Bible School and taking part in the women’s groups and Bible studies. She greatly enjoyed being a part of the quilting group at Bethel and also at the Senior Center in Fergus Falls.

Sally was a wonderful mother, grandmother, great-grandmother, and great-great-grandmother to Jerry’s family and her stepfamily. She loved to bake, sew and do handwork, especially crocheting and embroidery. Being an avid reader, she excelled at Scrabble and crossword puzzles.

Memorials are preferred to the Lutheran Brethren Seminary, Inspiration Point Bible Camp or to an organization of the donor’s choice.

Visitation: 4 – 6 PM Saturday, with a 5:30 PM Prayer Service, at Glende-Nilson Funeral Home, Fergus Falls, and one hour prior to services at the church.

To order memorial trees or send flowers to the family in memory of Selma "Sally" Swendsrud, please visit our flower store.