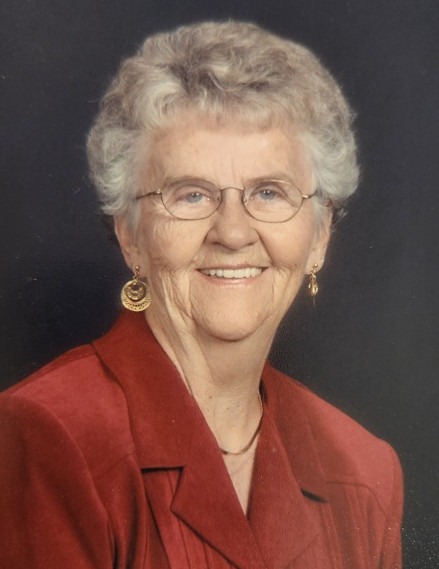 Ruby Joann was born April 17, 1932, in Barnesville, Minnesota, the daughter of John and Hilma Olson. She was baptized and confirmed into the Lutheran Faith and attended elementary school in Barnesville. Ruby graduated from Barnesville High school where she played the trombone, lettering in band. After high school she spent time in Minneapolis and Moorhead, Minnesota.

On June 6, 1953, she married Weldon “Pug” Henderson at the Assembly of God Church.  She worked at Lake Region Hospital in Accounts Payable for almost 40 years. Ruby and Pug lived on Bass Lake in Underwood, where the enjoyed family get togethers at the lake and fishing off the dock. She enjoyed a good game of cards or Yahtzee, playing piano, dancing, watching sports and even bowled on a league. Ruby liked to meet up with her lady friends for weekly breakfast conversation and would have her hair done weekly at the salon. She volunteered at the Veterans Home in Fergus Falls and had a love for dogs especially her, Toby. She served on the Underwood City Council for 20 years and was a member of the American Legion Auxiliary and Sverdrup Lutheran Church in Underwood. Ruby was a good friend and wonderful wife, mother, grandmother and great-grandmother.

She was preceded in death by her parents, John and Hilma; husband, Weldon ‘Pug”; a son, Jeffrey John in infancy and a grandson, Paul Weldon Henderson.

Service: 11 a.m. Saturday, October 29, 2022 at Sverdrup Lutheran Church, Underwood, with a visitation one hour prior to the service.

To order memorial trees or send flowers to the family in memory of Ruby Henderson, please visit our flower store.