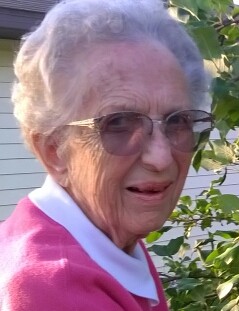 She was born February 14, 1930 in Graceville, Minnesota to Arthur Spencer and Alma (Dahlquist) Spencer of Beardsley, Minnesota.  She received her education at Beardsley, Minnesota and went on to attend Northwest Institute of Medical Laboratory Technique in Minneapolis, Minnesota.  After graduating from technical school, she went to work at Lisbon Memorial Hospital in Lisbon, North Dakota.  This is where she met her future husband.

On March 6, 1954 she married Philip Lacher.  She followed her husband with his career at Otter Tail Power Company.  Living in Jamestown, North Dakota and then Brandon, Minnesota before settling in Fergus Falls, Minnesota in 1961.

Phyllis was a homemaker and mother to five active children.  She was involved with Cub Scouts for her sons, and Camp Fire Girls for her three daughters.  She helped at Eisenhower Elementary School whenever they called and would even chaperon at High School dances.  She loved her coffee parties with the ladies on East Saint Charles street.  Phyllis loved to sew, bake, play cards and found bingo later in life.  She was so lucky!

In lieu of flowers, memorials are preferred to LB Hospice or an organization of your choice.

Private memorial services will be held for Philip and Phyllis Lacher at the North Dakota Veterans Cemetery in Mandan, North Dakota.

To order memorial trees or send flowers to the family in memory of Phyllis Lacher, please visit our flower store.