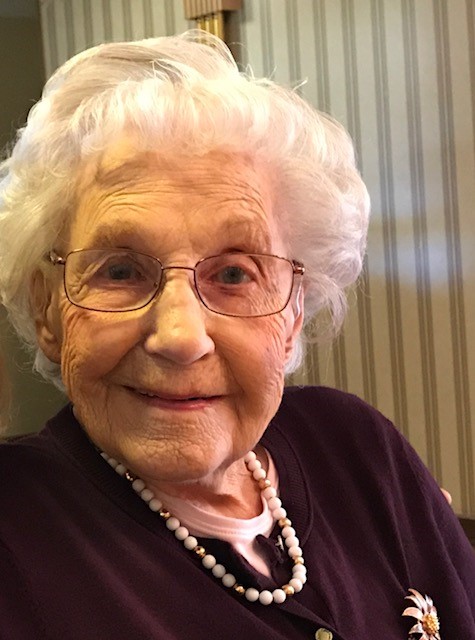 She described her childhood home as one filled with much love and laughter.  Unfortunately her mom, Effie passed away when Mertice was 14 years old.  Mertice had to quit school and care for her five younger brothers and sisters.  Her father, William remarried Helen (Kitchen) Zahnow and had five children.

On September 22, 1945, she married Leonard Saurer at St. Elizabeth’s Catholic Church in Elizabeth, Minnesota.  They farmed in Friberg Township until 1948 when they purchased a farm in Maplewood Township.   Maplewood State Park purchased this farm in 1972 when they retired from farming.  They built a house just outside Erhard, Minnesota and lived there until moving to Rothsay, Minnesota in 1992.

On August 9, 1997 Leonard passed away.  Mertice moved to Fergus Falls, Minnesota.   She moved into River Bend apartments living independently until age 98.  In 2016, she moved to Pioneer Cottages.

Mertice's biggest joy in life was her family.  She loved spending time with her children, grandchildren, brothers and sisters.   She enjoyed having company and she always made room at her table.  She was an incredible cook.  Her specialties included french toast, homemade bread, carmel rolls and pork chops and gravy.  She also enjoyed embroidery, playing cards and dominos and drinking coffee.  She was always ready to jump into the car and enjoy an outing with her family.

Blessed be the Memory of Mertice Harriet Saurer

Funeral Service: 11:00 a.m., Wednesday, February 21, 2018 at Our Lady of Victory Catholic Church in Fergus Falls, with visitation one hour prior to the service.

To order memorial trees or send flowers to the family in memory of Mertice Saurer, please visit our flower store.