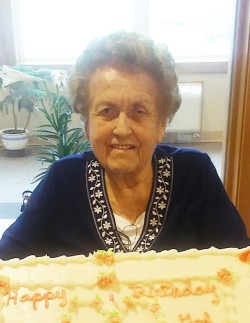 Mavis Violet Olson was born on April 26, 1926, by Clitherall, Minnesota the daughter of Bernie and Amanda (Floen) Erickson.  She was baptized and confirmed in Nidaros Lutheran Church.  She attended the Clitherall School and graduated from Battle Lake High School in 1944.

Mavis and Robert Olson were married on November 21, 1944, in Henning, Minnesota.  In 1948, they purchased their farm in Eagle Lake Township, where they first raised turkeys and then began dairy farming.  Robert died on November 23, 1981, and Mavis continued to live on the farm until April of 2017, when she entered the Battle Lake Good Samaritan Center.  Mavis enjoyed cooking, the outdoors, and working on the family farm.

To plant a beautiful memorial tree in memory of Mavis Olson, please visit our Tree Store.

To order memorial trees or send flowers to the family in memory of Mavis Olson, please visit our flower store.