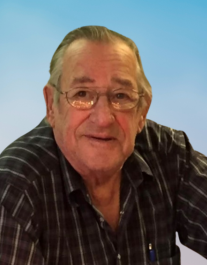 Matthew George Sterns was born on January 30, 1937, to Albert and Hazel (Foshaug) Sterns, at his grandparent’s home in Dalton, Minnesota.  He attended grade school in Dalton, high school in Fergus Falls and graduated from Ashby High School in 1955.  Matt enlisted in the US Air Force on June 14, 1955, and was stationed at Fort Belvoir, VA, Duluth Air Base in Duluth, MN. and Thule Air Base in Greenland in Engineering Equipment Maintenance.  He received his Honorable Discharge on February 3, 1959 and remained in the Air Force Reserves until June 13, 1963.

Matthew and Geraldine Anderson were married on June 29, 1966, in Sisseton, South Dakota.  They lived in Milwaukee, Wi, moved to Dalton in January of 1967, and then to Fergus Falls in 2011.  Matt worked as a carpenter in construction in Minneapolis, Milwaukee and Dalton.  In 1970, he purchased his own truck, doing over the road trucking, and later drove for various companies.  He enjoyed playing cards especially pinochle, solitaire and cribbage, playing bingo, and vegetable and flower gardening.

Memorial Service: 2:00 PM, Saturday, January 30, 2021, at Our Saviors-Ten Mile Lake Lutheran Church in Dalton, with visitation one hour prior to the service.

Interment: Our Saviors Cemetery by Dalton

To order memorial trees or send flowers to the family in memory of Matthew Sterns, please visit our flower store.