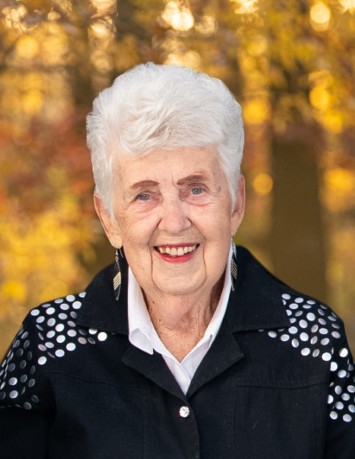 A joint celebration of Marlys and Donn’s lives will be held Saturday, June 26th, 9am at the Unitarian Church in Underwood MN and an open house held later the same day at their home on Otter Tail Lake from 1pm - 4pm. 38623 Wagon Trail Loop, Battle Lake MN

Marlys Irene Siems was born on June 20, 1937, in Dell Rapids, South Dakota the daughter of Ove and Ruth (Heeren) Anderson. She was baptized and confirmed in Bethania Lutheran Church in Jasper, Minnesota. She attended Fergus Falls High School, where she met her husband-to-be, Donn Siems. She graduated in 1955. Marlys and Donn were married at the Aurdal Lutheran Church of rural Fergus Falls in 1956.

Marlys lived along the shores of her beloved Ottertail Lake for over 60 years in the home she and Donn built prior to their marriage. Throughout the years, she swam with her children and grandchildren, boated, skied and sailed with friends, and never missed a summer evening sunset pontoon cruise. She was hostess to hundreds of guests and family who regularly visited their lakeside home. The fragrance of her signature dish: homemade caramel rolls, could be ’sniffed’ hours before anyone arose, and moments before the sunrise.

Marlys and Donn loved to travel. She read voraciously, studying the history and folklore of the 50 U.S. states and numerous countries they visited. And she loved home and the outdoors. Starting in the Spring when they heard the geese returning north, she and Donn moved into their camper to spend each night ‘under the stars,’ moving back into their home when the leaves began to fall in Autumn.

Marlys loved her grandchildren, celebrating their stories, sports, and songs for as many hours they asked of her. Her love for them was patient, steadfast, and soft as an easy chair. ‘Everything’ was important: from sports events, to recitals and graduations. She wrote many chapters in their lives - taking them camping in state and national parks, bicycling and skiing with them in her beloved Glendelough State Park, chaperoning them to Disneyworld, and playing the board game Mahjong deep into the night.

And there were dog walks, dog talks, and dog swims! Marlys was seldom seen without the companionship of her beloved yellow Labradors.

Her wit was sharp! Husband Donn didn’t need to have an opinion: Marlys had enough for both of them.

To order memorial trees or send flowers to the family in memory of Marlys Siems, please visit our flower store.