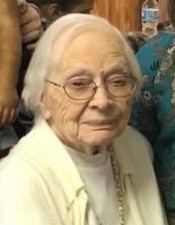 Marjorie Augusta Ida Eastwood was born on October 20, 1921, in Fergus Falls, Minnesota the daughter of Henry and Dora (Zimmer) Mahler.  She was baptized and confirmed in the First Evangelical and Reformed Church in Fergus Falls.  She graduated from Fergus Falls High School in 1939.

Marjorie and Robert Eastwood were married on August 26, 1942, in the First Evangelical and Reformed Church in Fergus Falls.  They farmed south of Underwood and in 1948, they moved over to the homestead, built a new barn and later moved their barn to their present farm.  Marjorie and Bob worked together on the farm, she was a homemaker who enjoyed cooking, sewing, baking, gardening, embroidery, taking care of grandkids, and was a collector of plates, salt and pepper shakers, and Christmas Villages.  Marjorie was a member of Tordenskjold Free Lutheran Church where she taught Sunday School, was part of the Ladies Aid Group where she served a number of years as president.  Marjorie was a firm believer in donating to numerous organizations and charities. Bob and Marjorie were honored to be the Underwood Senior Royalty in 2019.

Memorial Service: 11 AM, Friday, July 2, 2021, at Tordenskjold Free Lutheran Church of rural Underwood with visitation one hour prior to the service.

To order memorial trees or send flowers to the family in memory of Marjorie Eastwood, please visit our flower store.