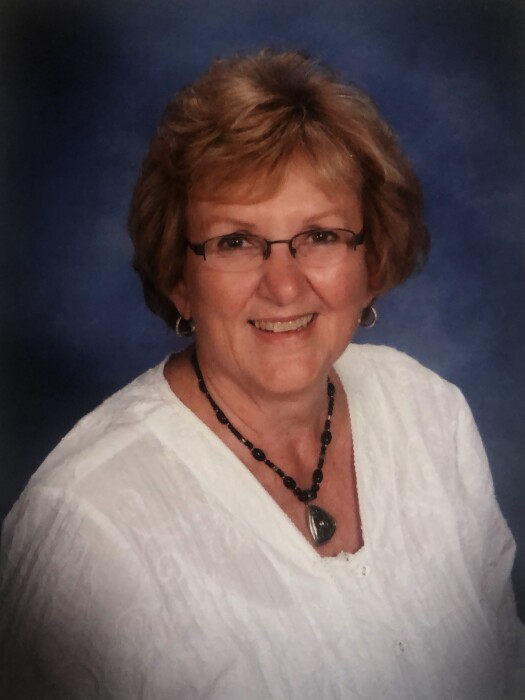 Marilyn Elizabeth Stolle died on June 10, 2021 surrounded by her family.  She was born the first of four children to Fred (Fritz) and Margaret (Hougham) Fuchs on February 9, 1939 in Minneapolis. The family farmed and lived near Big Lake until moving to Menahga in 1945.  Marilyn graduated from Menahga high school in 1957 and then attended Bemidji State College where she met her future husband, Norman Stolle.  They were married at First English Lutheran Church in Menahga on June 7, 1959 and were blessed to spend 62 years together.  Marilyn and Norm began their family in Clarissa, Minnesota where Norm taught and coached, and Marilyn became a homemaker and a mother to two children, Darrell and Diane. In 1967 they moved to Windom where she raised her family and worked as a clerk and then assistant manager of Ostenson's Variety Store and Village Shop.  After the store closed in 1990, she became a teacher's assistant in the Windom Public Schools until she retired for the first time in 2001.

Marilyn's idea of heaven on earth was found in a little cabin on Girard Beach on West Battle Lake. She and Norm first came to love Battle Lake when they managed the Beachwood Resort during the summers of 1966 and 1967.   Several years later, they were able to purchase one of the cabins that had been part of the resort, and family spent every possible weekend "going to the lake."  After her retirement from the Windom Public Schools in 2001, she and Norm built a house in the woods near the cabin and spent the next 19 summers at the cabin and winters in their house.  But retirement didn't take for her, in 2009, she began work as a paraprofessional in the Underwood Public Schools, a job she held until retiring for good in 2013.  She and Norm also delivered the Daily Journal together for 11 years in the Battle Lake area.

Marilyn was an amazing sister, wife, mother, mother-in-law, grandmother, great-grandmother, aunt, and friend.  She was a fierce supporter and defender of her family and friends, and was an especially devoted supporter of her children's, grandchildren's, great grandchildren's, niece's, and nephew's activities.  They didn't always see her in the stands, but they all heard her.  As her granddaughter Jacey said, "we always knew she had our backs."

She loved being around people and entertaining.  She hosted many friends and family gatherings and whether it was on a pontoon ride, playing games, or visiting on the deck, everyone remembers her infectious laugh.   She lived a courageous, joyful and loving life, and will be greatly missed by those who loved her.

Marilyn was preceded in death by her parents, Fred (Fritz) and Margaret (Hougham) Fuchs and her sister, Carolyn Bakkedahl and brother-in-law Russel Bakkedahl.

A visitation will be held on Sunday, June 20, 2021, from 2 to 4 PM, with a 4 PM Prayer Service, at the Glende-Nilson Funeral Home in Battle Lake and one-hour prior at the church.

To order memorial trees or send flowers to the family in memory of Marilyn Stolle, please visit our flower store.