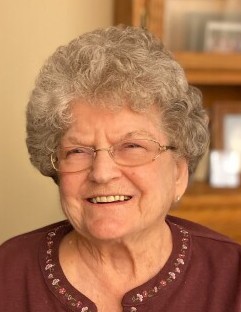 Marian Sandahl, 87 of Fergus Falls went home to be with her Lord and Savior on December 9, 2020.  Marian Romayne was born on April 24, 1933, to Edward and Ragna (Halvorson) Christopherson of Norwegian heritage, in Folden Township, of Otter Tail County, Minnesota.  She attended grade school at District #103, of Vining.  In high school she was in musical groups and sang with a mixed octet for graduation.  She graduated from Henning High School in 1950.

On August 3, 1951, she married Irvin Sandahl at Vining Lutheran Church.  They were married sixty-four years until Irvin passed away in June of 2016.  The couple lived in Barstow, California for two years while Irvin served in the United States Marine Corps.  They then lived in the Twin Cities area, Cambridge, Battle Lake and Fergus Falls.

Marian had worked as a secretary her whole adult life, the last being twenty years in medical records at Lake Region Healthcare, retiring in April of 1995.  Irvin and Marian enjoyed their retirement years traveling to Arizona and Texas during the winter months, and visiting family in California, Washington and Montana.

Marian accepted Jesus Christ as her personal savior when she was thirteen years old.  She has been a member of Crossroads Church in Fergus Falls since 1986.  She served on many music committees, taught Sunday School and volunteered with AWANA.  She enjoyed singing with her Christopherson siblings, in church choirs and trios, playing piano, include counted cross-stitch, doing crossword puzzles, decorating and baking for Christmas, having family and friends over for meals, coffee and desserts and mostly being with her children, grandchildren and great-grandchildren.

Preceding her in death was her husband Irvin; her parents; brothers, Ray, Lee, and Duane Christopherson; sisters, Dorothy Holte and Ardy Deckert.

Private Family Service was be held, followed by interment in the Vining Cemetery.

To order memorial trees or send flowers to the family in memory of Marian Sandahl, please visit our flower store.