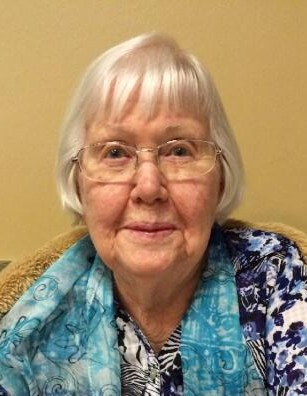 Mabel Marjorie Josephine was born on February 19, 1918 in Friberg Township. The daughter of Ferdinand and Minna (Johnson) Thom. She was baptized, confirmed and graduated at Trinity Lutheran Church in Fergus Falls.

On February 3, 1935 Mabel married Clarence Knutson in Fergus Falls. To this union came three children, Donald, Gerald and Christine.  Mabel worked at De Soto Creamery and Produce and Hardware Hank in Fergus Falls. Clarence and Mabel could often be found at their cottage on Swan Lake where they later built their year-round home. After retirement they wintered for 25 years in Arizona and would come home and spend summers with family on the Peterson Farm. She was a member of Trinity Lutheran Church in Fergus Falls where she was active in Church Circle, and in later years received many birthday, get-well and prayer cards from her circle.

Mabel served in Homemakers Group and was an excellent seamstress, being credited for making all her children’s clothes as well as her own.  She enjoyed traveling, playing cards especially whist and bridge. Mabel enjoyed spending time on the lake which could often be rewarded with a well-deserved fish fry. She cherished her time riding around in her granddaughter, Sandy’s convertible and was so proud of all her grand babies. Mabel loved spending time with family and friends and even learned to use Facebook to keep up with all her family’s pictures and events. Blessed be the Memory of Mabel Knutson.

She was preceded in death by her parents, Ferdinand and Minna; husband, Clarence in 2006, her two sons and daughters-in-law, Donald (Marion) Knutson and Jerry (Charlotte) Knutson; siblings, Ena (Walter) Simpson, Elsie and Evelyn Thom.

Funeral Services: 2:00 P.M., Friday, September 17, 2021, at the Glende-Nilson Funeral Home in Fergus Falls, with a visitation one hour prior to the service.

To order memorial trees or send flowers to the family in memory of Mabel Knutson, please visit our flower store.