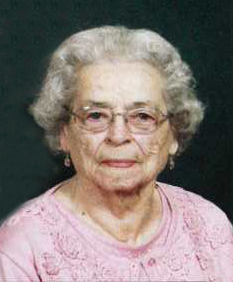 Lucille was born, September 7, 1921 to Frank and Grace (Schultz) Perkins in Monticello, MN. She attended Monticello High School and graduated in 1939.  She was active in the high school marching band, playing the cornet.

She married her high school sweetheart, Perrie V. Sheldon, on June 12, 1940. They were blessed with five children, Marion, Loren, Keith, Jay and Judy.

During the early part of married life, Lucille worked as a switchboard operator at the Northwestern Bell Telephone Company in Monticello. The day their second child was born, Perrie received his notice for call to service in the Army so she and the two children moved in with her parents. The phone company was located just behind their house and she was lucky to be hired on, so she could earn extra money to help pay rent to her folks. She worked there until 1946, when Perrie was discharged and he came back home and started back at his previous job. He was soon promoted but that required a move. The young family moved to Longville, MN and she concentrated on her two young sons at the time.  They would move to various places over the next several years, including St. Cloud, Morris—where their third son was born, Benson, and in 1952, settling in Fergus Falls where their last two children were born.

Throughout the 50's and 60's Lucille dedicated herself and her time to raising those five children and making a home for her husband who ended up in a position where he traveled for over 30 years. In 1953, Perrie and Lucille became members of the Federated Church and Lucille was very active in the Ladies Aid Organization, at the church, until the 1980's.   As the kids grew older she went to work for the Fergus Falls School System in various positions.  She was a playground supervisor at Cleveland and Lincoln elementary schools.  Later she worked in the school lunch room preparing the lunches at the Fergus Falls Junior High School.  She also volunteered with the American Red Cross Blood drives for several years. And, she found time to support her husband as his secretary, phone operator, bookkeeper and administrative assistant in his countless endeavors and activities throughout our community i.e.:  DAV, VFW, American Legion, the Vets Home, the ELKS and EAGLES, the fundraising and construction of the Fergus Falls Food Shelf, the development of the OTC Veterans Memorial Highway and his final project in Fergus Falls, The Veterans Walk Of Flags.  In her spare time, Lucille enjoyed cross stitching, knitting, and handiwork.

She is survived by her daughter in law Kathryn Sheldon of Yankton, SD; her sons, Loren (Melinda) of Hixson, Tennessee, Keith (Mary Anne) of Divide, Colorado, Jay (Tammy) of Elbow Lake, MN; daughter, Judy of Woodbury, MN; nine grandchildren; 16 great-grandchildren; and one great-great grandson, along with many nieces and nephews.

In addition to her parents, she was preceded in death by her beloved husband of 77 years, Perrie V. and eldest son M. Milo.

Memorial Service:  2 PM Tuesday, May 1, 2018, at Glende-Nilson Funeral Home, Fergus Falls, with visitation one hour prior to services


To plant a beautiful memorial tree in memory of Lucille Sheldon, please visit our Tree Store.

To order memorial trees or send flowers to the family in memory of Lucille Sheldon, please visit our flower store.