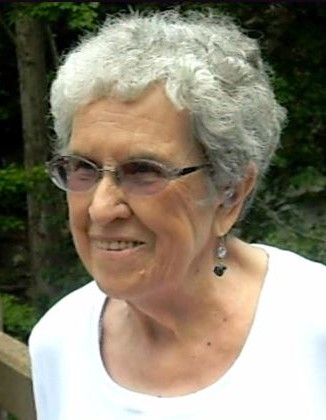 Lucille was born on December 23, 1927 in Fergus Falls, the daughter of George and Susan (Shriver) Duncan.  She attended grade school at District 111 and later District 92 when the family moved closer to Fergus Falls.  Lucille graduated from Washington High School in Fergus Falls in 1945.

On December 23, 1946, she married Aldrich Larson and they had three children: Susan, Bonnie, and Daniel.

For 23 ½ years, she worked at the Regional Treatment Center and earned her LPN license.  As her children were growing up and while working full time, she continued her education, graduating from Moorhead State with a bachelor’s degree in social work in 1976.  Lucille was employed at OtterTail County Social Service and retired as a supervisor in 1990.

In her spare time, Lucille enjoyed quilting, scrapbooking, and swimming.  A charter member of a homemakers group, Lucille made many wonderful friendships that continued until her death.

Lucille enjoyed traveling and was able to visit Japan, American Samoa, Germany, England, Sweden, and many places in the United States.  As a member of Toastmasters, Lucille served in many capacities and greatly enjoyed going to conventions and meeting fellow Toastmasters.  An active volunteer, she worked for the Senior Companion program for 10 years, gave much of her time to First Baptist (CrossRoads) Church where she was church historian, served on the church foundation board, and was president of the church mission board.

In addition to her parents, she was preceded in death by her sons-in-law, Curtis Peterson and Bruce Ingraham; six siblings, Raymond, Charles, Edwin, Pauline, Eleanor, and Frances; and a niece, Linda Sue Duncan.

Visitation:  5 – 7 PM Wednesday, with a 6:30 PM Prayer Service, at Glende-Nilson Funeral Home, Fergus Falls, and one hour prior to services.

To order memorial trees or send flowers to the family in memory of Lucille Larson, please visit our flower store.