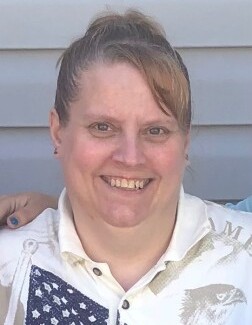 Louise Allison was born on June 17, 1971, in Buchanon County, Missouri, the daughter of Cheri (Nugent) Hixson. She graduated from the Alternative Learning Center in Fergus Falls in 1991. She continued her education at Minnesota State Community College in Fergus Falls, majoring in photography, ceramics and computer science. On August 13, 1993, she married Todd Allen Whaley at their home in Fergus Falls. Louise worked at Pizza Heaven, Papa Murphy’s and the Print Shoppe in Fergus Falls. She worked at Sun Mart Bakery & Deli for over 10 years as a cake decorator and florist.

Louise’s interests included photography, painting, drawing, making jewelry, attending yard sales and baking. She was an amazing artist who often made her art as special gifts to her family and friends. She enjoyed spending summer weekends with family at her grandparent’s lake place on Lake Lida. She was the glue that held the family together and she will be deeply missed by all who knew her. Louise was a member of the Rollag Steam Threshers, where she painted many masterpieces at the threshing grounds.

Memorial Service: 1:00 P.M., Saturday, January 15, 2022, at the Glende-Nilson Funeral Home in Fergus Falls, with visitation one hour prior to the service.

To order memorial trees or send flowers to the family in memory of Louise Whaley, please visit our flower store.