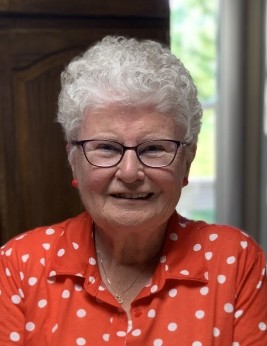 Lorraine Mae Underhill was born on September 16, 1939, in Fergus Falls, Minnesota the daughter of Vernon and Gladys (Dalseg) Nelson.  She was baptized and confirmed in the First Lutheran Church in Battle Lake.  Lorraine attended the Battle Lake Public School graduating from Battle Lake High School in 1957.  She moved to St. Paul and started working for the Department of Corrections with the State of Minnesota.

Lorraine and Robert Underhill were married on September 5, 1964, in the First Lutheran Church in Battle Lake, Minnesota.  They lived in St. Paul for eleven years and in June of 1973, Lorraine and Robert moved to her home farm by Battle Lake.  She was employed in the office with LSS, starting at the Lake Park Wild Rice Children’s Home and then moved to their main office, retiring after twenty-five years.  She then started working with PATH retiring from there in 2016.  Lorraine enjoyed cooking, baking cookies for the grandkids, and liked all sports but mainly the Minnesota Twins.  She was a member of First Lutheran Church and was treasurer of WELCA, and the Sons of Norway in Vining.

Social Distancing and Masks will be required.

To order memorial trees or send flowers to the family in memory of Lorraine Underhill, please visit our flower store.