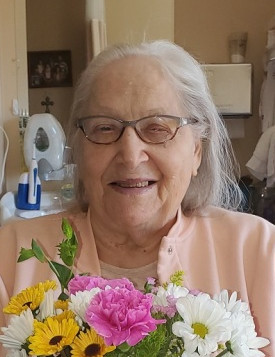 Lorna J. Buckingham was born in Calvin, North Dakota, the daughter of  Matie and Richard Buckingham on July 31, 1924. She was Valedictorian of her high school class. After graduation, she went to work in Devil’s Lake, ND working in the kitchen of the school for the deaf. Lorna had really wanted to go to nursing school, but by the time she graduated from high school there was no money. While working at the school for the deaf she found out about the Cadet Corps Nursing Program, which she later joined and was a three-year nursing program. When she joined she did not have enough money to buy the initial uniforms. Her youngest brother, Darwin Buckingham sold his cow and paid for her first set of uniforms.

In 1948, Lorna married Jack McCabe. She and Jack had six children. After 13 years of marriage, Jack tragically lost his life in a car accident in Phoenix, Arizona. She moved herself and her 6 children to Fergus Falls, MN. Without that nursing degree the lives of her family could have been quite different. Lorna often surprised her children with new TV’s, air conditioners etc. Lorna was always able to find a job. She worked in hospitals, and was the Ottertail County Public Health Nurse, she worked in nursing homes and coached developmentally disabled adults and taught them life skills. She did not retire until she was 83 years old. One of the founding men and women of Dignity Hospital, her picture is in the lobby of Dignity Hospital in Chandler, Arizona. Lorna was involved with Cub Scouts in Fergus Falls for many years and was also on The MN Board of Diabetes.

Lorna never stopped learning. She took college courses well into her 70’s. When it was time for events like prom and snowball dances, confirmation, or graduation there were new outfits. She was quite a good seamstress and often she made the outfits.  She also sewed wedding dresses and quite a few bridesmaid dresses. Lorna was a great crafter and made many doilies, dolls and other types of handmade things that her children still have to this day. She read her bible daily and made sure all her children went through confirmation and continued to go to the Presbyterian Church while they were still living at home. It was because of the importance that she placed on education that all her children had an education past high school. This quote sums up her philosophy and if she were to give anyone advice, she probably would have said something like this…, “speak to your children as if they are the wisest, kindest, most beautiful and magical humans on earth, for what they believe is what they become.”

The family kindly requests everyone to wear masks who attend which will be provided at the funeral home.

Funeral Service: 11:00 a.m., Wednesday, August 24, 2022, at the Glende-Nilson Funeral Home in Fergus Falls, with a visitation one hour prior to the service.

To order memorial trees or send flowers to the family in memory of Lorna McCabe, please visit our flower store.