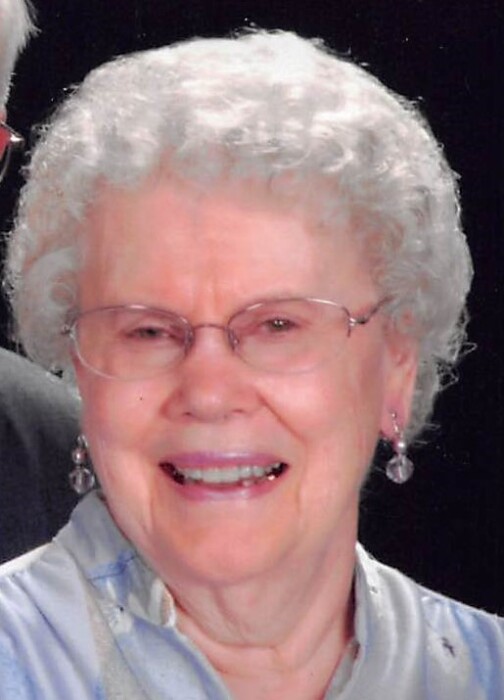 Loretta (Schuster) Giesen was born on October 31st, 1927 on a farm near Kathryn, ND.  Loretta would tell her children stories of growing up in a large farm family during the depression, such as tales of her father hauling her and her siblings to the country schoolhouse in a wagon covered with a buffalo skin blanket, when they first received electric lights, etc.  After a few years in ND, the family moved to another farm near Chokio, MN.

Loretta graduated from high school in Chokio as Valedictorian of her class at the age of 16 in 1944.  Shortly thereafter she embarked on a career in nursing, working through the Cadet Nursing Corp during WWII and studying at St. Catherine’s University in St. Paul.   Her nursing work took her to short stints in New York City and on the west coast before she returned to her roots, working at the hospital in Morris, MN.  There, in 1950 she met her life-long love, Bill Giesen, while caring for Bill’s mother, Eulalia, after appendix surgery.

Bill and Loretta were married in 1952 while Bill was still in the US Army.  Their first home was in Duluth, MN.  After Bill’s honorable discharge, he returned to his pre-war employer, Otter Tail Power Company, and Loretta followed him to positions in Wahpeton, ND, Fergus Falls, MN, Milbank, SD, and finally back to Fergus Falls, MN, where they remained for the rest of their time together.

Loretta managed her large household of 7 children by living conservatively and with the efficiency and lessons learned as a child of the Great Depression.  She taught her children how to cook, and well.  If it could be raised, canned, hand-made, saved, or repurposed, it was.  If you needed to get something done, you found a way to do it even if you did not have the right tool or device.  You only needed quality at a good value.  You did not need the best or what was most fashionable.  An example of her frugalness, and faith, is a request she left us: “I would prefer, but not insist, on being cremated.  God’s going to put me back together in the end anyway, and I’ll take up so much less space that way!”

Over the years Loretta lived her faith and personal values through numerous civic, Catholic Church, and charity organizations.  She always had the time and energy to put into any cause she felt was important.  Sometimes, that required volunteering the help of her small personal army (her children) for whatever task was needed, be it delivering flyers, mowing a neighbor’s grass, or delivering food to someone in need.

Loretta also found time to be a strong proponent for and instructor of Natural Family Planning for a couple of decades.

Loretta was unafraid to stand up for what she believed in, even if it was an unpopular position.  She raised her children to be independent, to take responsibility and not make excuses, to be comfortable being different from the crowd, and to be firm in what you believe in.

Family was important to Loretta, and she stayed in close touch with her large extended family and knew minute details about shirt-tail relatives, etc.

After Bill’s retirement from Otter Tail Power Company in the early 1990’s.  Loretta and Bill enjoyed a lot of traveling via car around the US and Canada.  Favorite trips included Alaska, twice, the Northeast US, and various points in between.

Additionally, they found the time and energy for going to Guatemala with the Godchild Project.  Loretta helped pour concrete floors for houses in a small rural community.  Loretta (and Bill) remained very active with this organization throughout the years, providing monetary and other support.

Having been born on Halloween, Loretta greatly enjoyed wearing a full “witch” costume on Halloween while greeting the children who trick-or-treated at the door, and even wearing it out for dinner occasionally.  She enjoyed wearing this costume even after suffering a traumatic brain injury in 2006 that dramatically changed the rest of her life.

Loretta passed away on Saturday, January 9th, 2021, having reached the age of 93.

Loretta is survived by her husband, Bill, and her 7 children:  Jeanne (Marvin) Lugert of Wyndmere, ND, Alan (Eileen O’Byrne) Giesen of Minneapolis, MN, Brad Giesen of Boise Idaho, Hugh (Laura) Giesen of Champlin, MN, Dan (Julie) Giesen of Minneapolis, MN, Janet (Keith) Day of Dassel, MN and David (Kerrie) Giesen of Rochester, NY and numerous grandchildren and greatgrandchildren.   She is also survived by 5 of her 9 siblings (Ken, Lee, Josephine, Margaret, Juanita) while having been proceeded in death by Dick, Elaine, Verna, and Marian.

Loretta requested this special passage to be included in her obituary:

Death is not extinguishing the light

It is putting out the lamp

Because dawn has come

Memorials are preferred to:

Gifts may be made to PioneerCare Foundation to honor loved ones and support Pioneer’s mission and programs. You may designate your gift to support a special project or program, or for where the Foundation identifies the greatest need.

A Private Family Service will be held .

To order memorial trees or send flowers to the family in memory of Loretta Giesen, please visit our flower store.