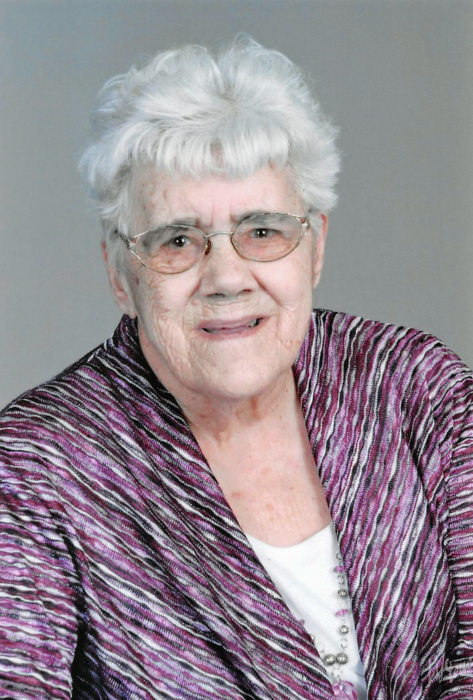 Lois was born on June 1, 1929 in White Pigeon, Michigan, the daughter of Albert and Esther (Quick) Warren.  She graduated from Constantine High School in 1947 and was very active in band and 4H

Lois and Norman Keith Perrin were married on July 15, 1950, in the Methodist Church parsonage by Pastor Elliot in White Pigeon, Michigan. They farmed and had dairy cattle until 1960, when they bought their farm by Ashby and moved the family, machinery and cattle to Minnesota.  In fact, Lois traveled by herself along with the children to Minnesota, while Norman traveled ahead with the cattle and machinery.

Lois took great pride not only in being an active part of the family farm, but also in raising her children. Norman and Lois enjoyed traveling, camping and bluegrass music and made many longtime friends, many that spent their winters in Texas with Norman and Lois.  A highlight for her was traveling to Hawaii with her sister and nephew, touring four of the five islands.  In her spare time, Lois enjoyed crocheting and crossword puzzles.  She was a member of the Calvary Covenant Church in Evansville.

In addition to her parents, she was preceded in death by her husband, Norman; grandson, Chad Wagner; brother, Leland Warren; and sister, Pauline Oxender.

Visitation: 4 PM to 7 PM Friday, with a Prayer Service at 6:30 PM in Glende-Nilson Funeral Home in Evansville, and one hour prior at the church.

To order memorial trees or send flowers to the family in memory of Lois Perrin, please visit our flower store.