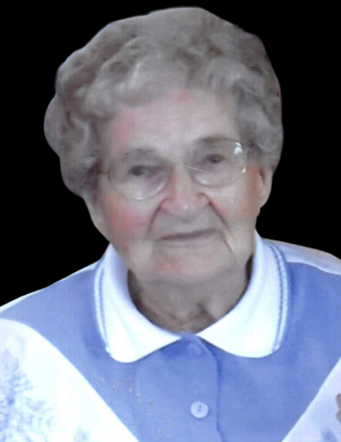 Leona was born in Wahoo, Nebraska on July 16, 1925, the daughter of William T. and Fern (Hansen) Porter.  Leona received her education in Nebraska, and graduated from High School in the Lincoln, Nebraska area.

In her younger years, Leona moved to California with one of her sisters, where she met and married James Henry Thompson.  They were blessed with five children.

Out of necessity, Leona was an extremely hard-working mother who always did the best she could for her family.  In her later years, she had a small pet store in Fergus Falls, and enjoyed raising birds.  She enjoyed outdoor activities, especially gardening.  Leona also worked at the Minnesota Veterans Home and the More For grocery store.

She was a member of Woodland Baptist Church, where she was very active and cherished her church family.

In addition to her parents, Leona was preceded in death by her sons, Terry Thompson and David Thompson; and three siblings, Lloyd, Don, and Fern.

Funeral Service: 1 PM Saturday, September 19, 2020, at Woodland Baptist Church, Fergus Falls, with visitation one hour prior to services at the church.  For those unable to attend the service, a live stream of Leona’s service will be available on her memorial page at www.GlendeNilson.com.

To plant a beautiful memorial tree in memory of Leona May Fern (Porter) Thompson, please visit our Tree Store.

To order memorial trees or send flowers to the family in memory of Leona Thompson, please visit our flower store.