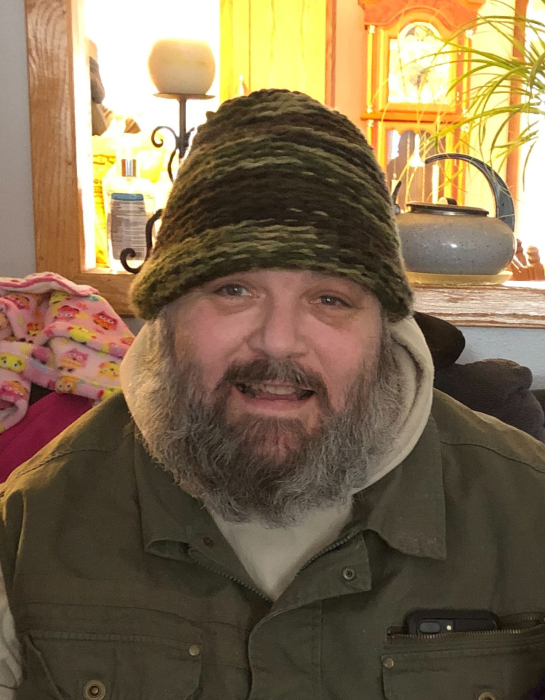 Kenneth was born to Larry and Linda Watkins on July 25, 1966, in Colorado Springs, Colorado. He was named after his uncle, Sheridan Jay Watkins, who died in Vietnam. Pete was baptized in a creek in Shingletown, California. He was confirmed at Trinity Lutheran Church. He attended Faith Lutheran Church in Fergus Falls.

Pete was the oldest of five kids. He graduated in 1984 from West Valley High School in Cottonwood, California. Right after high school he traveled with the Carnival. After working with the Carnival, he worked for California Conservation Core and built camp sites and hiking trails in Mt. Whitney. At this time, they did not use gas power, so he had to work by hand. Pete also worked landscaping and ran heavy equipment.

Pete was working at Sierra Saw Shop when he met his soon-to-be wife, Andrea Drager. Pete and Andrea met online. They were in a chat room and Andrea needed help with the speakers on her computer. Pete offered to help her. But it turns out she didn’t even have speakers. They started talking on the phone frequently in 1996 and one of their conversations lasted for nine hours. That was during the time you had to pay to talk on the phone.

In February 1997, Pete and Andrea met in-person. He proposed to Andrea, but she turned him down. Andrea wanted to meet his family first. Andrea went to visit Pete for Easter in California. She missed her flight, causing Pete to have to drive through Oakland, CA at midnight. Memorial weekend, Pete packed up his belongings and drove “Blue” (his big blue chevy pickup) to Fergus Falls, Minnesota. A year later, on August 15, 1998, at Trinity Lutheran Church, they were married. Pete and Andrea spent their honeymoon at Loll’s Resort on Pickerel Lake in Minnesota. Throughout the years they spent a lot of time there.

In 2000 Pete and Andrea had their first baby, their daughter Echo followed by their son, Kaleb in 2003.

Pete loved wood working. He built hand-carved canes and used to make wooden boxes. He loved to shoot guns, hunt, and fish. Pete also made knives, loved to garden, can, and quilt with his mom and grandma. Pete had so much of his mom’s spirit, he loved her deeply. Pete also had a special bond with his grandma, who was a writer and he, himself was in the process of writing a book, but never finished it. He wrote poems and had a talent for drawing. Pete also enjoyed playing Polish Softball. He enjoyed baking and cooking. He played World of War Craft and was skilled in Minecraft. He would only play games on a PC, never a console. Pete also collected maps. He wanted to wallpaper one of their rooms in the basement with maps. He would order them off the internet adding to his collection. His other collection was old books. He had so many books that they called it their “library room.” What Pete loved most though, were his children, Echo and Kaleb. Echo would braid his beard with beads and take pictures of him. Pete and Kaleb had a special bond over movies. They had numerous “deep thought” conversations. They loved their dad and will miss him dearly.

Pete had a special place in his heart for his dog, Sonya. She was a Rottweiler. Sonya was Pete’s first love. He spent every single day with her and even slept with her in the same bed. They were attached at the hip. Pete taught Sonya to fetch bowling balls in water and to catch clay pigeons in the air without breaking them. They had a very distinct bond. She was his best friend.

He is preceded in death by his mother, Linda Watkins, and mother-in-law, Beverly Drager.

A Memorial Service will be held 5-7PM, Friday, December 3, at the Glende-Nilson Funeral Home in Fergus Falls, Minnesota. A Celebration Picnic will be planned for later in the summer.

To order memorial trees or send flowers to the family in memory of Kenneth Watkins, please visit our flower store.