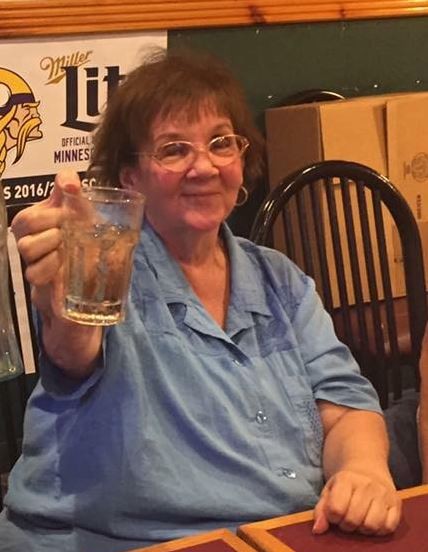 Kathie was born on December 18, 1949 to Clarence and Betty (Wojciechowski) Wille in Minneapolis, MN.  She passed away peacefully at the age of 68 on July 9, 2018 surrounded by some of her closet family.

Kathie grew up in Crystal, MN with her four other siblings and graduated from Robbinsdale High School in 1967.  Kathie went on to cosmetology school to follow her dream of becoming a hair dresser. She worked in this field for some time making hair big and perms extra tight until she realized one day that she was tired of working with cranky women.  A career change ensued, and she eventually found herself working in the word processing department of Prudential Insurance.

Slaying keyboards in corporate America and partying in fine establishments like Stand Up Frank’s was great but, Kathie soon found her world changing after she fell for a cheesy one-liner of a man named Bob in a local grocery store.  Bob and Kathie married on July 18, 1981 and he eventually whisked her away to, well several different spots.  During Bob and Kathie’s travels, they found time to make a baby and would decide, per the advice of a rather crusty neighbor named Barney, that they should name him Clint.  Their family complete, Bob and Kathie continued their travels eventually settling of sorts in Buffalo, ND.

Kathie was vocal of the fact that motherhood was the pride of her career and relished the fact that she was able to be a stay-at-home mama.  Some of the notable items she passed along to her son included: never waste a cool whip container, save plastic grocery bags (forever), love for the Motown greats, love for bar hopping, and how to cook to name a few.

Following the death of her main squeeze Bob and having completed raising a semi-functioning adult, Kathie re-entered the workforce working in the deli at Walmart.  A perfect job indeed as there was always a fresh audience to try out her one-liners and quips.  During this time she met a new main squeeze named Ray. They never married (in her words, been there/done that) but she loved spending time with him, traveling the country-side of rural MN, and learning all there was about farming.

She was preceded in death by her parents, Clarence and Betts, and her husband Bob, and brother-in-law Ron Lind.

She is survived by her son, Clint (Emily) Larby of Grand Forks, ND, along with their rather messy brood of children: Dane, Deacon, Dani, and Dru.  She is also survived by her sisters, Vickie (Jim) Olson of Oakes, ND, Pam Lind of Taylorsville, UT, Carol (Keat) Heales of Herriman, UT, and the golden boy of the family, Mike (Suzanne) Wille of Waconia, MN.  Finally, she is survived by numerous cousins and nieces/nephews along with their families. Kathie became a great-great aunt a couple of times removed which her son enjoyed pointing out.

Memorial Service: 3 PM Thursday, July 12, 2018, at CrossRoads Church, Fergus Falls, with visitation one hour prior to services at the church.

To order memorial trees or send flowers to the family in memory of Kathleen Larby, please visit our flower store.