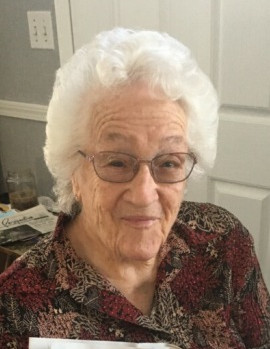 Katherine I. Haugen, 94, of Fergus Falls, gained her wings on Wednesday, July 6, 2022, at her home on Wall Lake under the care of Knute Nelson Hospice and her daughters.

Katherine Irene was born March 15, 1928, at her grandmother’s house in Pelican Rapids, the daughter of Melvin and Amanda (Anderson) Johnson. She was baptized and confirmed at Bethel Lutheran Church of Pelican Rapids. She attended rural country school in Pelican Rapids. On July 7, 1962, she married Morris Everett Haugen in Sisseton, South Dakota. The couple resided on their farm in rural Fergus Falls until they moved to their final home together on Brekke Lake Road, Fergus Falls. The couple also owned a retirement home at Arneson’s Rocky Point, Lake of The Woods for over 30 years. Katherine worked as a Building Services Supervisor for the Regional Treatment Center. Her faith and family were the most important things in her life, cherishing her time spent with family at gatherings and events.

In lieu of flowers memorials preferred to the Stavanger Cemetery Association.

Memorial Service: 2:00 P.M., Friday, July 15, 2022 at Stavanger Lutheran Church, Fergus Falls, with a visitation one hour prior to the service.

To order memorial trees or send flowers to the family in memory of Katherine Haugen, please visit our flower store.