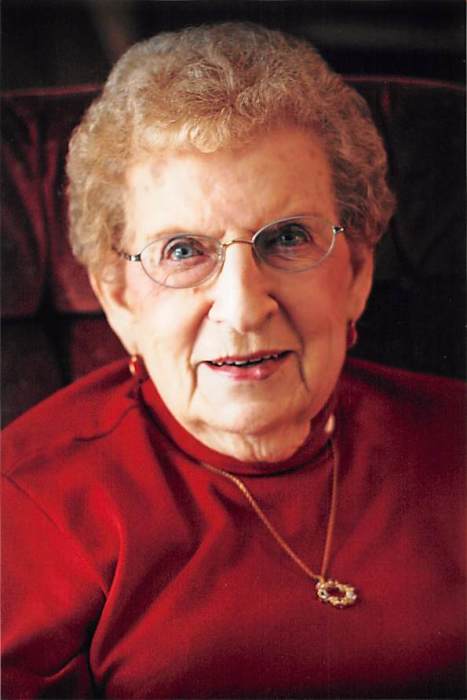 June Marion Rossum was born on June 11, 1921, in Evansville, Minnesota the daughter of Aldrick and Agnes (Nelson) Carlson the oldest of seven children which included two sets of twins.  She was baptized and confirmed in Immanuel Lutheran Church, attended Rural School District #87 and graduated from Evansville High School in 1939.  June lived all her life in the Evansville area, was a member of Immanuel Lutheran now Faith Lutheran Church.

June married Floyd Rossum on February 27, 1944, in the Immanuel Lutheran Church parsonage on the same wedding date as her parents and maternal grandparents.  Floyd and June farmed eleven years south of Evansville, with eight of those years on the same farm as her maternal grandparents.  In 1955, they moved into Evansville.  June started her bookkeeping career with the Midland Co-op in Brandon, then for her brothers with Carlson Construction Company, and then with Farmers Lumber and Supply for their family yard.    In 1980, she began bookkeeping for her son Rich at Lakeside Lumber in Ashby, retiring in the summer of 2014, at the age of ninety-two.  She was active in the church teaching Sunday School and the ladies aid.  June enjoyed her work, crocheting, Word Seek, reading, took part in the Evansville Garden Club and Evansville Senior Citizens Center, did a lot of painting and art work but most of all enjoyed her family.

Visitation: Sunday from 4 to 6 PM at the Glende-Nilson Funeral Home in Evansville and one hour prior on Monday at the church.

To order memorial trees or send flowers to the family in memory of June Rossum, please visit our flower store.