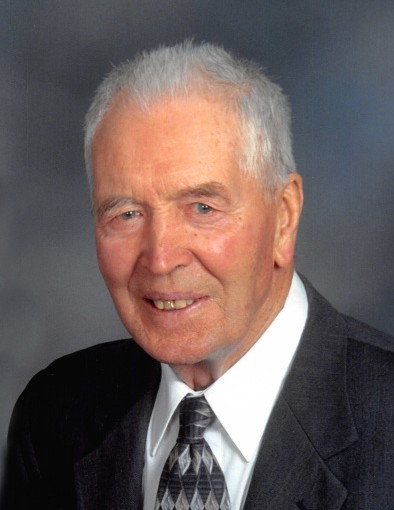 Jorolf was born on February 26, 1916, in Hazen, North Dakota, to Hans and Lillie (Tysver) Ronnevik.  The family moved to Carlisle township, Otter Tail County, Minnesota, in the spring of 1919. Then on his fourth birthday his family moved to the Ronnevik farm near Carlisle, MN where he lived for 61 years.

He was baptized into God’s family as an infant and later confirmed his faith at Hedemarken Lutheran Church, rural Carlisle.  He attended School District #286 in Carlisle through eighth grade.  In 1934 Jorolf graduated from high school in Fergus Falls, MN, and as far as it is known, he was the last surviving member of his class.

On June 18, 1943, Jorolf married Alice Hexum at Hedemarken Lutheran Church. They lived on the Ronnevik farm where they were blessed with five children.  In 1981 Jorolf and Alice retired to a new home built by their family     in Carlisle.  In November 2014, they moved to Woodland Lodge in Fergus Falls where he received excellent care until the end of his life.

Jorolf had a great love for his family, friends and farming. He was a wonderful husband and father who passed on his strong Christian faith to his family. He stayed connected with family and friends near and far, always being ready to help neighbors. Jorolf had a great appreciation for the land and all of God’s creation.  Farming the land, planting trees, growing roses, keeping up his lawn and gardens all brought much joy to his life. The family cottage on Crystal Lake, which his parents bought in 1944, was also a favorite place for Jorolf and Alice to spend Sunday afternoons, the 4th of July and many other summer days with his growing family, relatives, neighbors and friends.

Jorolf was a lifelong learner and an avid reader, a lover of fine music and an excellent conversationalist. He was proud of his Norwegian heritage. Jorolf and Alice made four trips to Norway to visit relatives and to see the beauty of their ancestral land. When he was 90 years old, he and Alice made their last trip to Norway accompanied by 3 granddaughters. Speaking and reading Norwegian along with translating many of his father’s writings from Norwegian to English were very important to him.

Jorolf was preceded in death by his parents, his wife Alice of 72 years in October 2015, his sister and brother-in-law, Myrtle and George Lindstrom, and four siblings who died in childhood, Erling, Sverre, Valborg and a stillborn brother.

Visitation: 5 - 7 PM Thursday, October 10, 2019, with a 6:30 PM Prayer Service, at Glende-Nilson Funeral Home, Fergus Falls, and one hour prior to services at the church.

To order memorial trees or send flowers to the family in memory of Jorolf Ronnevik, please visit our flower store.