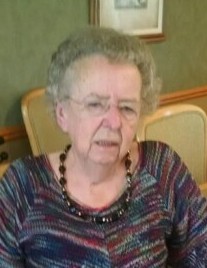 Jeroma Theodora was born September 16, 1927 in Barnesville, Minnesota to John and Hilma (Hanson) Olson.  She grew up on a farm and attended country school District 19 in Prairie View Township near Barnesville, graduating from Barnesville High School in 1946.  On November 22, 1946, Jo was united in marriage to Floyd O. Anderson.  The couple made their home in the Anderson home place in Atherton Township, Wilkin County.  To this union 4 children were born, Karen, Carol, Wesley, and Lynn.  Carol passed away in infancy.  Floyd passed away in 1959.  Jo moved into Barnesville in 1968. On July 2, 1971 she was united in marriage to Cal Hanson at Rapid City, South Dakota.  The couple made their home in Rothsay where they owned and operated the I94 Motel.  She and Cal moved to Fergus Falls and built Motel 7 which they owned and operated for many years. Cal passed away October 5, 2007.

Jo loved to spend time with her grandchildren, great-grandchildren, and family.  She enjoyed sewing quilts for her family and also being outdoors.  She enjoyed the Rothsay Senior Citizens where she was an officer for many years.  Jo also liked to knit, crochet and have her lady friends over for cards.

Memorial service: Saturday, January 8, 2022 at 1 PM at Glende-Nilson Funeral Home, Fergus Falls with visitation 1 hour prior to the service.

To order memorial trees or send flowers to the family in memory of Jeroma Anderson-Hanson, please visit our flower store.