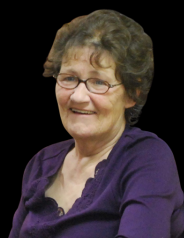 It is bittersweet that we share that mom’s time on earth is done.  Her soul was released from her tired, worn body on March 26, 2022, and is now free of pain and limitations, at last with her Savior.

She was the eldest of Janice Matthews and Curtis Oman’s seven children.   After graduating high school, she had a 12-year marriage to Ed Swenson, who started out their family with two boys, Todd and Tim.  In short order they welcomed their first daughter, Lisa.  Two years later came along Dawn.  The family started a life in rural Evansville with a new home, jobs, and many friendships.  Twelve years later, Mom was widowed.  But while God makes unpredictable plans, He also takes care of us.  Mom then married Duke Anderson, and with this marriage came Duke’s four children David, Roger, Robbie, and Peggy.  Soon after, Mom and Duke welcomed another daughter, Johnna Faye, into the world.  Mom and Duke were married for 28 years.

Later, her heart was blessed with two beautiful granddaughters, Samantha Dawn and Alexis Marie Reger.   Just when Mom thought she was too old to fall in love again, along came Stella Faye and Leo Duke Nynas.  These two little joys can’t give away enough hugs and have a deeper love of John Deere than Grandpa Duke

While some people die with a long list of accomplishments and accolades, Mom’s greatest accomplishment was a long list of people she counted as friends.    There wasn’t a place she would go without running into someone who could share a cup of coffee and good conversation.   She read every book and magazine she could find, with a particular fondness for mysteries and non-fiction.   She had an answer for every question.  She always picked up the phone when you called.  She will be missed for her quick wit, sharp sense of humor, and finding a reason to keep almost everything.

When mom was asked if she was fearful of dying, she said NOPE.  She was ready because she knew all her girls were safe and taken care of.  She knew without a doubt the love she felt for her family, friends and God.

Mom was preceded in death by her first husband, Ed and his son Todd, her second husband, Duke and his son Roger, her brother Curt, her parents, and four sets of in-laws.  She leaves behind three daughters and their families: Lisa (Swenson) and Rick Reger and their children Samantha and Alexis (Brenden Tyryfter), Dawn Swenson and Todd Herz, and Johnna (Anderson) and Dan Nynas and their children Stella and Leo.  Her beloved cat and companion, Maddie.  Her stepchildren Tim Swenson, David and Kim Anderson, Robbie Anderson, Peggy Anderson and her son Ryenn.  Her siblings Lynn, Doug, Glenn, John, Shannon, many nieces, nephews, and in-laws.  And the many friends we have always considered our family, you know you who are.

Say not in grief “she is no more” but in thankfulness that she was.  We ask that you cherish those you love and hold them close as Mom did.  Throw a pork loin on the grill, pour a cup of coffee, rest your feet and curl up with a favorite book.  Be attentive to your memories, find her in the sound of rustling oak leaves in fall, the smell of a new magazine, forget-me-nots, and evening sunset, or the Big Dipper.  And when you find her, keep her in your heart for a while.

In lieu of flowers, mom would love if you donated to any Humane Society in honor her beloved cat, Maddie, who was mom’s greatest companion in her final years.  You may also choose a charity close to your heart

Memorial Service: 1 PM Saturday, April 2 at Glende-Nilson Funeral Home in Evansville with Visitation one hour prior to the service.

To order memorial trees or send flowers to the family in memory of Janet Anderson, please visit our flower store.