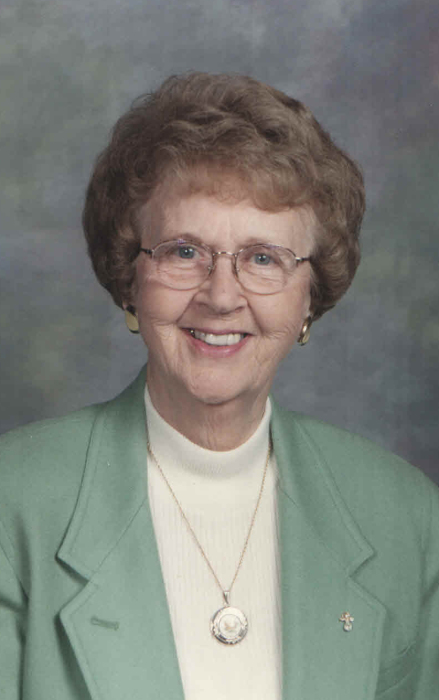 Ione Junice Listrom was born March 14, 1921, in Hampden, North Dakota the daughter of John and Inga (Thorson) Listrom.  She was baptized on October 30, 1921, along with a favorite cousin Alice with Pastor P. Laurhammer officiating.  She was later confirmed on June 14, 1935, with Pastor O. Dahle of Zoar Lutheran Church in Nakoma, North Dakota officiating.  Ione was raised on a farm in North Dakota.  She attended school in Hampden and Highland Consolidated School near Edmore.

Having moved to Fergus Falls, Minnesota, with her parents, she was employed by the Townsends.  She met and later married Alvin E. Peterson at the First Lutheran Church in Brainerd, Minnesota on August 9, 1942.

While her husband served with the Army Air Force in the European Theatre, Ione lived in Minnesota employed by Sears and Honeywell.  She was reunited with Alvin in 1945, after the war they moved to Wahpeton, North Dakota, Aberdeen, South Dakota and later to Iowa.

Alvin and Ione had three children; Pamela, John and Sheryl.  They lived in Iowa, were in the retail business and were members of First Lutheran Church in Clarion, Iowa.  They were later employed by Lutheran Social Service in Bloomington, Minnesota until they retired to Battle Lake, Minnesota in 1984, where they became active members of First Lutheran Church.

Ione was preceded in death by her husband, Alvin; son-in-law, David Miller; parents, John and Inga Listrom; father and mother-in-law, David and Hulda Peterson; and by three brothers-in-law, Marvin, Byron and Gordon Peterson.

Visitation: one hour prior to the service

To order memorial trees or send flowers to the family in memory of Ione Peterson, please visit our flower store.