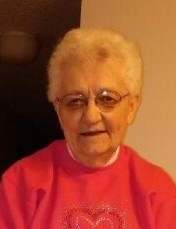 Helen Emma was born on December 28, 1930, in Monson Township, Traverse County, the daughter of George and Elsie (Augspurger) Mills. She was baptized and confirmed at Wheaton Presbyterian Church. Helen graduated from Wheaton High School in 1948, where she was Valedictorian of her class.

On September 14, 1952, she married Raymond D. Johnson. They were blest with a son, Gary Lee. The couple farmed in Monson and Redpath Townships of Traverse County from 1948 to 1990 while Helen worked as a legal secretary for Johanson, Winter & Lundquist Law Firm from 1948-1968. She worked as a secretary and Deputy Sheriff for Traverse County from 1968 – 1978. Helen worked as bookkeeper and appliance sales for her son at Gary’s Refrigeration and Air Conditioning from 1980-1990.  In 1997 they moved to their home in Elbow Lake where they lived until moving to Fergus Falls in 2009. In 2014, Helen moved to the Village Co-op Apartments in Fergus Falls. Helen was a board member and lifetime member of the Traverse County Museum in which she was instrumental in starting.

Helen enjoyed her flowers and gardens, canning vegetables, snowmobiling up north with family and camping and fishing at Tipsinah Mounds.  In 1977, Helen and Raymond travelled to Sweden to visit Raymond’s cousin.

Preceding her in death were her parents, George and Elsie Mills; husband, Raymond D. Johnson in 2013, a sister, Irene (Dwain) Leversee; a brother, Ira (Hazel) Mills and sister-in-law, Leona Mills.

Visitation:  One hour prior to the service at the church.

To order memorial trees or send flowers to the family in memory of Helen Johnson, please visit our flower store.