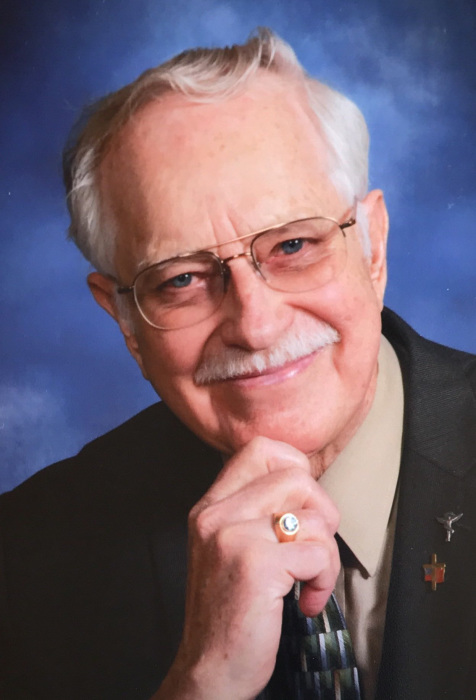 Harlan attended Augsburg College and Northwestern College of Chiropractic in Minneapolis. Over summer breaks during his college years, he worked with his dad in the road construction business. Harlan began his chiropractic career in South Dakota, however moved back to Minneapolis to pursue his interest in finance as a stock broker. Following the birth of his first son, Harlan and his family moved back to his hometown area and he returned to his vocation as a chiropractor. He operated chiropractic offices in Ashby and Fergus Falls for years to come. Harlan continued treating patients even into this present year.

In 1968, Harlan married Judy Skogen of Lake Mills, Iowa. God blessed Harlan and Judy with four children (Shawn, Nicole, Timothy, and Brita) and three grandchildren (Kenna, Ava, and Harriet). The couple just celebrated 50 years of marriage on May 25th. Harlan’s family was very important to him, as was his concern for the well-being of his patients.  He also enjoyed traveling, politics, and doing projects around the home. Harlan and Judy resided in rural Ashby, near Pelican Lake, for the majority of their married life.

Harlan’s belief in Jesus Christ was central in his life; he and Judy were active in their church throughout their marriage. Most recently, they were members of Kvam Free Lutheran Church near Dalton. Harlan was passionate about his faith, supporting and promoting various Christian ministries.

He is survived by his wife, Judy, sons, Shawn (Jennifer) of St. Louis Park and Timothy of Bloomington; daughter, Brita (Paul) Osland of Minnetonka; three grandchildren, Kenna and Ava Jacobson and Harriet Osland; two sisters, Ramona (Roger) Johnson and Bonnie (Keith) Englund. He was preceded in death by his daughter, Nicole, on October 23rd, 2012, his parents, Arthur and Harriet (Hoff) and step-mother Harriet (Jacobson).

Visitation: Thursday, July 26, 2018 from 4 to 7 P.M. with a prayer service at 6:30 P.M. at the Glende-Nilson Funeral Home in Ashby and will resume for one hour prior to the service at the church.

To order memorial trees or send flowers to the family in memory of Harlan Jacobson, please visit our flower store.