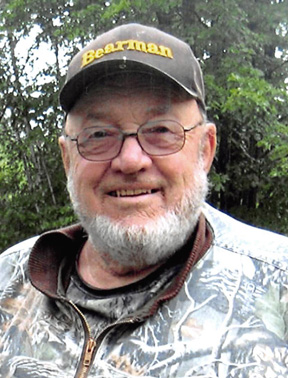 Gordon was born on September 12, 1938 in Fergus Falls, MN, the son of Carl E. and Faith (Noffsinger) Swenson.  He graduated from high school at West Central Ag School in Morris, MN.  On October 17, 1957, he entered the United States Navy, where he served as a 2nd Class Aviation Ordnanceman.  Gordon was honorably discharged on March 2, 1962 and returned to Fergus Falls, where he began working for Otter Tail Power Company as a lineman for 38 years.

On December 27, 1970, he married Linda Holt Lancaster, and they were blessed with two children, Glen and Melissa.

On November 24, 1991, he married Catherine Kraus-lana, and they resided in Fergus Falls.

Gordon’s love for the outdoors began at a young age and he enjoyed hunting and trapping.  He became a hunting guide in the early 1970’s, hunting and guiding for black bear, buffalo, caribou, and wild game in Africa.  Gordon greatly enjoyed guiding salmon fishing trips in Sheboygan, Wisconsin during the summer months as well.  He authored two books: “Bear Man” and “Bear Man: The Rest of the Story”, enjoyed painting wild life scenes

In addition to his parents, he was preceded in death by his brother, Gary Swenson; and sister-in-law, Helen Swenson.

Visitation:  5 – 7 PM Monday, at Glende-Nilson Funeral Home, Fergus Falls, and one hour prior to services

To order memorial trees or send flowers to the family in memory of Gordon Swenson, please visit our flower store.