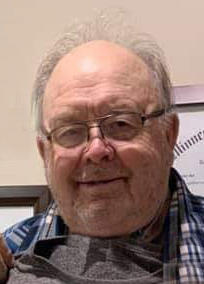 Gerald Elroy Anderson was born March 31, 1941, in Fergus Falls, Minnesota to Clifford and Hazel (Speten) Anderson.  He lived by Vining until age five, when they moved to the “home place” near Millerville.  He attended and was confirmed in the Nidaros Lutheran Church.  Jerry attended the Brandon Public School, graduating from Brandon High School in 1959.

Jerry and Diane Prazak were married on February 11, 1967.  They became members of Christina Lake Lutheran Church and Jerry and Diane were blessed with three children.  Before getting married he worked road construction and in the fall of 1966, he bought the farm where he lived and farmed the rest of his life.  He loved his children very much and taught them all a great work ethic.  Jerry was a wonderful dad, grandpa and spouse.  He was always a good provider and kept us all well fed.  Jerry was a member of the Grant County Wagon Train for forty years.  He had several special coffee friends and thank you for being there for him.  Jerry had many episodes with health problems (especially pneumonia) and on Saturday, December 21, 2019, his body said enough, I’m tired, so God took him home.

Visitation: Thursday from 4 to 7 PM, with a 6:30 PM Prayer Service, at the Glende-Nilson Funeral Home in Evansville and one-hour prior at the church on Friday.

To order memorial trees or send flowers to the family in memory of Gerald Anderson, please visit our flower store.