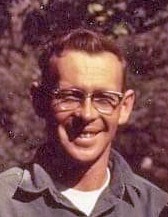 He was born April 23, 1941 in Fergus Falls to Clarence and Thelma (Kalling) Whitlock.  He graduated from Fergus Falls High School in 1960.  He worked at the Scott’s Store.  On December 6, 1963, he married the love of his life, Irene Swanson.  They were married for 57 years.  George joined the army reserve and was active for 4 years.  George bought the family farm homestead and began a life of farming with Irene.  In 1970, George and Irene welcomed their daughter, Yvonne, into their lives.  George milked cows, farmed the land, and fixed all the neighbor’s equipment and his own when it broke down.  He was a very caring man and had a passion for hard work, family, and friendships. He was a good provider for his family and a good husband and father.  George and Irene renewed their wedding vows on December 6, 2020.  Irene passed away on June 22, 2021.

George enjoyed playfully picking on people, helping others that needed help and being with his family.  George was a talented welder and enjoyed doing that for both himself and others.  He also enjoyed attending auction sales where he found many “treasures”.  When his eyesight was failing, he enjoyed gardening.  After his heart surgery, he learned to develop his baking skills, but not dishwashing!  In his younger years, he enjoyed playing Monopoly and in his older years, playing cards.

George is survived by his daughter, Yvonne Whitlock, several nieces, nephews, and friends, a brother-in-law, Lyle (Val) Swanson and a sister-in-law, Betty Patterson.  He was preceded in death by his parents, his wife, a sister, Evelyn Hauberg, and two brothers-in-law, Marlo Hinsverk and James Patterson.

Funeral service: Friday, January 21, 2022 at 2:00 P.M. at the Glende-Nilson Funeral Home in Fergus Falls with visitation being held for one hour prior to the service.

To order memorial trees or send flowers to the family in memory of George Whitlock, please visit our flower store.