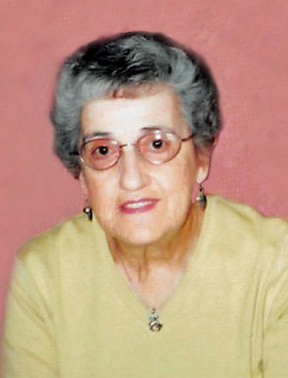 Gail Theresa Klimp was born on September 13, 1929 in Girard Township, rural Henning, Minnesota to Herbert and Helen (Looker) Quick.  She was baptized and confirmed in the Vining Lutheran Church.  Gail attended District 153 in Girard Township and graduated from the Henning High School in 1947.  Shortly after graduation she was married to Bennie Klimp on June 3, 1947 in the First Lutheran Church in Battle Lake.  After marrying they moved to Kansas City where Gail worked for Aldens and Woolworths while her husband attended radio school. Missing rural life they moved back to Battle Lake and farmed in Everts Township until they purchased their own acreage near East Battle Lake in Henning Township.  The farm was Gail's great joy and her home for 50 years until they returned to live in Battle Lake.  Gail and Bennie were blessed with 65 years of marriage and were life long partners in both running their farm and a business in Henning known as Klimp's Variety Store where many locals fondly remember buying candy and comics as children.  After retirement Gail was an active hostess to the many clock customers that frequented Bennie's Clock shop at their farm and drove her husband great distances to deliver clocks or make house calls to service grandfather clocks.  Gail was a tireless worker and a perfectionist in all forms of the domestic arts from gardening to cooking, baking, canning, sewing and fine needlework.  One of her favorite tasks was mowing her lawns with her trusty riding lawn mower both on the farm and later at their home in Battle Lake.  She maintained her beautiful flower beds and meticulous lawn right up through her 88th birthday.  Gail was a member of the Vining Lutheran Church her entire adult life and was an active member of the Lydia Circle.  She also belonged to the Gray Ladies as a volunteer setting hair and cheering the residents at the Henning Nursing Home.  She and her husband were also regular visitors at the area nursing homes where they entertained the residents with sweet or comical little stories and words of comfort.

To order memorial trees or send flowers to the family in memory of Gail Klimp, please visit our flower store.