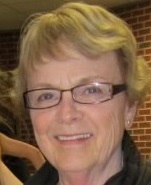 Gail Digre, 83, passed away peacefully surrounded by her daughters on Friday, September 30, 2022 at Good Samaritan Society in Battle Lake, Minnesota. We are so grateful for the kind and compassionate care she received while living there the past three years and could never say thank you enough, especially to her favorites (you know who you are).

Gail Werpy was born January 19, 1939 in Madison, Minnesota to Raymond and Lucille (Nordgaarden) Werpy. She graduated from Madison High School in 1957 and married Stub Digre in October 1958. They opened Stub’s Supper Club in Madison from 1960 to 1968, at which time they moved to Fergus Falls and owned/operated Stub’s Supper Club in Battle Lake until their retirement in 1995. Gail and Stub brought up three very lovely girls: Wendy, Kelly, and Polly.

Gail was a social butterfly who was known for her quick, sarcastic wit and knack for hosting, both at the supper club and her home. Anyone who was lucky enough to attend a Blanche Lake gathering will recall how warmly Gail welcomed visitors onto her beachfront patio and how impressively she could whip up an assortment of meticulously placed snacks and appetizers on color-coordinated serveware for even the most impromptu of get togethers.

She was a long-time member of First Lutheran Church in Battle Lake, serving the congregation in many roles over the years. Her faith was of the utmost importance to her.

Gail liked to be good at everything, so she was. She researched all topics of interest relentlessly and loved to utilize her massive background knowledge to prove others wrong whenever the opportunity presented itself. She was able to lend her many talents to a wide variety of activities, whether it was designing and sewing costumes for local plays or decorating lavish Christmas trees in the Twin Cities. She had an eye for design and organization, and was glad to assist whenever it was asked of her (and also when it wasn’t).

Gail was happiest when surrounded by family and friends, of which she had many. She loved gardening, singing, word games and logic puzzles, playing bridge and mahjong with her girlfriends, dinner/movie dates, and keeping a meticulous house. She was opinionated, tenacious, compassionate, loving, and hard-working.

She never lost her signature sass, even in her final days.  We will miss her so much.

Preceding her in death are her parents, her husband, Stub Digre, and her grandson, Charlie Martin.

Arrangements for Gail Digre are with Glende Nilson Funeral Home of Battle Lake.

To order memorial trees or send flowers to the family in memory of Gail Digre, please visit our flower store.