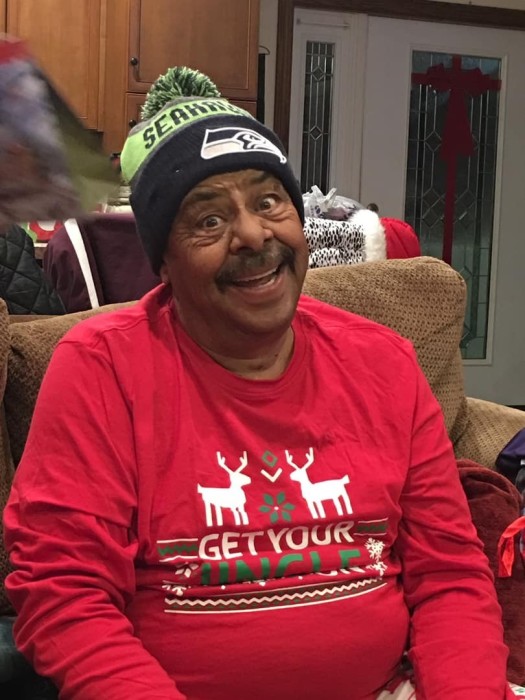 He was born February 11, 1945 in Mason City, IA to Frank and Mary Lou (Villa) Servantez.  He grew up in Missouri and Texas.  Frank enlisted in the U.S. Army in 1968 and served two tours of duty in Vietnam.  He belonged to the 5th group special forces out of Ft. Lewis, WA.  He was honorably discharged in 1971.  It was while Frank was in Ft. Lewis that he met the love of his life on a blind date.  Frank and Joan Petersen were married six months later.  They settled in Tacoma, WA and raised two daughters and many “adopted” daughters.  They always had an open door for everyone.  Frank always made everyone feel at home.  He became a car salesman in the ‘70’s.  He loved people and he could talk anyone’s ear off.  He had many friends that became like family in Washington.  He retired in 2006 and he and Joan moved to Minnesota.  His wife, Joan, was one of twenty-one children and they now wanted to be closer to them.

Frank enjoyed racing, bingo, Farkle and the occasional night out at the casino and talking to everyone there.  He also loved watches, cologne and candles…..no he wasn’t a girl - although if any of his grandkids asked, he would be up for his nails painted, make-up and his hair done!  He loved being “poppa” to all of his grandkids and had a special spot in his heart for each of them.

Visitation: Sunday, Aug. 4 from 2 to 5 P.M. with a prayer service at 4:00 P.M. at the Glende-Nilson Funeral Home in Fergus Falls and resuming for one hour prior to the service at the church.

Mass of Christian Burial: Monday, Aug. 5 at 11:00 A.M. at Our Lady of Victory Catholic Church in Fergus Falls

To order memorial trees or send flowers to the family in memory of Frank Servantez, please visit our flower store.