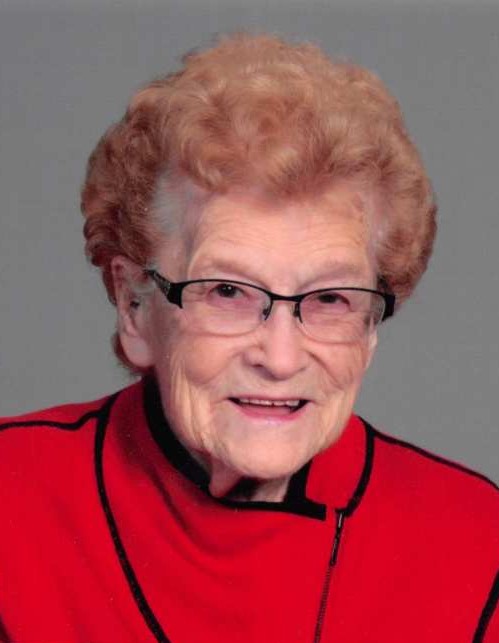 Florence Vivian (Johnson) Nelson was born September 3, 1921 to Victor and Blenda Johnson in Melby, Minnesota. She was raised in Melby where the Johnson Brothers, Victor and Ben owned and ran The Johnson Brother’s Store. Florence attended Melby Grade School, Ashby School and graduated from Evansville High School In 1939. She met the love of her life, Wilbur, during high school. He played basketball and baseball and she was a cheerleader. One of the cheers went like this: Lutefisk, lefse, pulsa, cream, Evansville High School basketball team! After graduation Florence attended Comptometer School in South St. Paul, Minnesota.

Florence married her high school sweetheart, Wilbur on June 6, 1942. Son Scott Jeffrey(deceased) was born March 29, 1946 at St Joseph’s Hospital in St. Paul, Minnesota. When Scott was 6 months old the family returned to Melby and bought Johnson Brother’s Store. Daughter Deborah Kay was born July 25, 1951 in Alexandria. In 1955 they moved to Evansville and bought The Schwantz Store, renaming it Nelson’s Store. Florence helped Wilbur in the store and in 1987 they sold it to son Scotty and his wife, Ginny. Both Wilbur and Florence were still working at the store, but took many trips around the world including, Russia, England, Sweden, Norway, Australia, New Zealand, and Hawaii, to name a few. Wilbur passed away in 2015 and Florence continued to come down to the store.

Florence was a member of Faith Lutheran Church, Faith Women, Faith Choir, Progressive Garden Club, and Evansville Community Club. She enjoyed attending the many activities of her children, grandchildren, and great grandchildren. The youngest of her great grandchildren called her “ Big Grandma”. She was a Christian woman with a great sense of humor and an avid Minnesota Twins fan. She will be missed by all who knew her.

On Friday, March 20, 2020, Florence passed away at Evansville Care Center, Evansville, Minnesota at the age of 98 years.

To order memorial trees or send flowers to the family in memory of Florence Nelson, please visit our flower store.