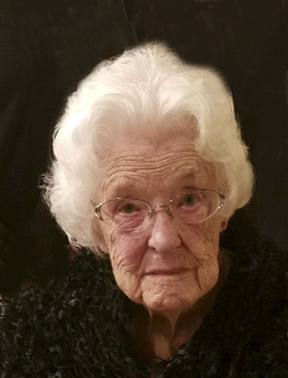 Evelyn Ingeborg (Anderson) Schmidt, beloved matriarch of her large extended family, died November 9, 2018 at the home of her daughter in Battle Lake, MN at the age of 97.  Though her death was not a tragedy but instead the completion of a long, meaningful life, her passing will be mourned deeply by family and friends.  "For everything there is a season...a time to be born and a time to die."  (Ecclesiastes 3)

Evelyn was born at her parent's farmstead in Wanger Township, Marshall County, MN at 7:30 a.m. on December 14, 1920, to Otto and Hulda (Stromlund) Anderson, first- and second-generation immigrants from Norway and Sweden.  A brother, Wendell, was born four years later, but two years after that their mother Hulda died of tuberculosis, leaving their father to care for his two small children as a single parent and operate his farm for the next four years.

As reported by the "Stephen Messenger" in January 1930 when Evelyn was 10 years old, her father Otto--then a "popular young farmer of the Wanger neighborhood" -- "sprung a surprise on his friends" by marrying his housekeeper of several years, Agnes "Aggie" Anderson, a girl from the neighboring farm.    This union had two children, Mavis and Dean.

Evelyn was baptized and confirmed at Salem Lutheran Church.  She grew up on the farm and knew the value of hard work.  She also did domestic work for neighboring farm families.    She graduated from Stephen High School in 1938.

Evelyn married Harry Cecil Schmidt (born December 6, 1911) at her parents' home in rural Stephen, MN on October 24, 1940.  They initially lived with Harry's parents, assisting in the farm operation, but then assumed the management of the farm, with its livestock and small grain crops; later they specialized in growing Certified Seed potatoes.  They raised five children and provided housing for the local country school teacher and a number of family members and farm hands.  Evelyn was a great mom and grandma, taking much delight in her little ones and showing great patience; a great cook for family and many guests and farm workers, often using food she had grown and then canned or frozen; a great seamstress making clothes her family wore and specializing in making hundreds of beautiful quilts for church charitable work and as gifts to children and grandchildren. Harry and Evelyn were very active in every aspect of the ministry of Salem Lutheran Church and provided leadership to a thriving Happy Corner 4-H Club, in addition to local government and community participation.  Both Harry and Evelyn were instrumental in developing the Stephen Curling Club and enjoyed the friendships surrounding that sport.  Love of family, zest for life, hard work, reverent care for the land, and a strong faith in God characterized this couple. In retirement they rented their land to a neighbor and moved to Karlstad, MN.  After Harry died peacefully under Hospice care on December 14, 1992, (Evelyn's birthday) Evelyn continued to live in her Karlstad home, eventually taking an apartment at The Meadows Assisted Living facility for seven years.  She spent her last 15 months living in the beautiful home on West Battle Lake with her daughter, Crystal, and son-in-law, William Davis.

Evelyn was preceded in death by her parents, Otto and Hulda; step mother, Agnes; husband, Harry; brother, Wendell and sister, Mavis.  She leaves behind her five children and their families: Sharon (Allan) Nelson, Peter (Vicki) Schmidt, and Lynette (Charles) Kehler all of Fargo/Moorhead; Crystal (William) Davis of Battle Lake, MN, and Michael (Deborah) Schmidt of Warren, MN.  Also remaining are Evelyn's 14 grandchildren, 21 great grandchildren, and one great-great-grandson, her brother Dean (Linda) Anderson of Argyle, MN and many loving nephews, nieces, and other extended family members.

Funeral arrangements are with the Glende-Nilson Funeral Homes of Battle Lake, MN.

To plant a beautiful memorial tree in memory of Evelyn I (Anderson) Schmidt, please visit our Tree Store.

To order memorial trees or send flowers to the family in memory of Evelyn Schmidt, please visit our flower store.