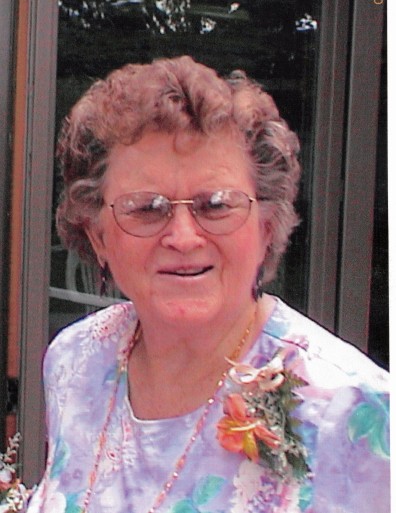 Eunice Catherine Grinager began her journey in life in Hollister, CA on September 13, 1921. She was the middle child of Irving Bowden and Nellie Vaughn. She was predeceased by her two brothers, Foster Bowden and Leslie Bowden.

She was a child of the depression era and had many stories to share of her young life picking fruit in the Salinas Valley, along with living over the San Andres Fault and watching their dining room table dance on a daily basis. After high school she ventured to Sacramento, CA where she had a lengthy career with the Corp of Engineers for 31 years. This is where she met her husband, Paul D. Grinager who had returned from WWII – she had joined the bowling league through her work and Paul took up bowling to meet some nice young women, one of whom was Eunice. They eventually married on June 2, 1951 and began their lengthy venture in life together, which ended for Paul in 2004, after 53 years of togetherness. Paul and Eunice had three children, Paula Grinager (Rowan), Kenneth Grinager, and Kathleen Grinager. In 1961, they purchased their current residence on Ottertail Lake which became a destination summer vacation for the entire family.

After Eunice retired from the Corps in 1976 and Paul the following year, they began traveling to Ottertail Lake, MN and spending approximately five months a year enjoying lake life and adapting themselves as part of this new community. They also traveled to Brandbu, Norway twice to visit new-found relatives from the Grinager farm.

Eunice enjoyed sewing, cooking/baking, gardening, and READING – at one point she subscribed to four newspapers!! Everyone who knew her commented on her constant state of being a “busy bee”. Another past time she took up was genealogy research on her parent’s side of the family. This afforded her a few fun trips to Salt Lake City Genealogical Library – which she soon discovered that she was a “Daughter of the Revolutionary War”!

Eunice had remained active up until three years ago when a stroke slowed her down – she then became housebound and began her eventual decline. We almost expected her to make it to 100 – given her great genetics but God saw differently. She was currently 98 years and 10 months from another celebration of living…

Visitation:  5 - 7 PM Monday, at Glende-Nilson Funeral Home, Battle Lake, and one hour prior to services at the church.

Mass of Christian Burial: 11 AM Tuesday, July 28, 2020, at St. James Catholic Church, rural Underwood.  Due to the Governor's mandate, masks will be required at the visitation and Funeral Mass.

Interment: 4:30 PM Tuesday, at St. Otto's Cemetery, Fergus Falls.  Following the interment, all are invited to the Grinager Home around 6:00 PM for a reception in honor of Eunice, 37030 Roinez Trail, Battle Lake, MN.


To plant a beautiful memorial tree in memory of Eunice Grinager, please visit our Tree Store.

To order memorial trees or send flowers to the family in memory of Eunice Grinager, please visit our flower store.