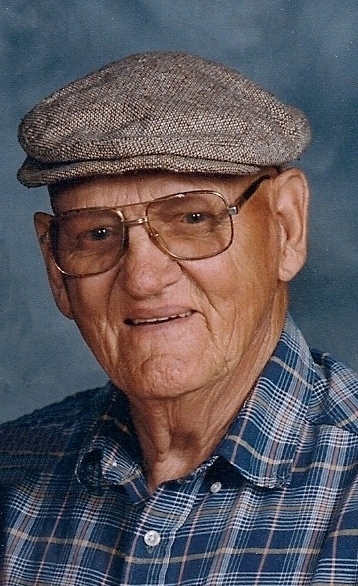 Eugene Elliott was born on June 27, 1919, in Superior, Wisconsin, the son of Helge N. and Jerutia (Elliott) Carlson.  At the age of two, his family returned to Minnesota, living in several places before settling in the Pelican Rapids area.  He attended the Elliott School of Friberg Township for two years and then completed grade school at District #35E, also known as the Fogelberg school in Erhard Township.  Eugene left home at the age of 17 to work on various farms before being drafted into the U. S. Army.

On August 21, 1941, he entered the U.S. Army.  Eugene served in the Armored Field Artillery in Patton’s 3rd Army.  He was stationed in the European Theater, serving in Englund, France, Luxenberg, and Germany during the last nine months of WWII.  He was discharged in September of 1945.

On October 25, 1947, he married Mary Jean Jorgenson at the Eagle Lake Lutheran Church of rural Battle Lake.  The couple resided in Denver, Colorado for six months, then in Fergus Falls, Fargo and Pelican Rapids.  Eugene worked for the Sunshine Biscuit Company of Fargo for 18 years and nine years at the Farmer’s Elevator of Pelican Rapids.  They were the parents of six children, William, John, Ruth, Daniel, Rosemary and Marla Jean.

Eugene was a member of Central Lutheran Church where he sang in the choir and in 1984 joined the Calvary Evangelical Free Church of Pelican Rapids where he served as a Deacon.  A committed Christian, he enjoys bible studies and fellowship with believers.  He is a member of the VFW Post #5252.

After his retirement in 1982, he enjoyed rototilling, mowing lawns, raking leaves and snow removal in the Winter. He enjoyed music all his life and especially singing and playing guitar with Eugene’s Gospel Group, also musical jam sessions at various churches.  Eugene and Mary Jean traveled in 32 states with other families and enjoyed bicycling, skiing and camping.  He especially enjoyed Army Reunions.

Visitation: one hour prior to the service at the church

To order memorial trees or send flowers to the family in memory of Eugene Carlson, please visit our flower store.