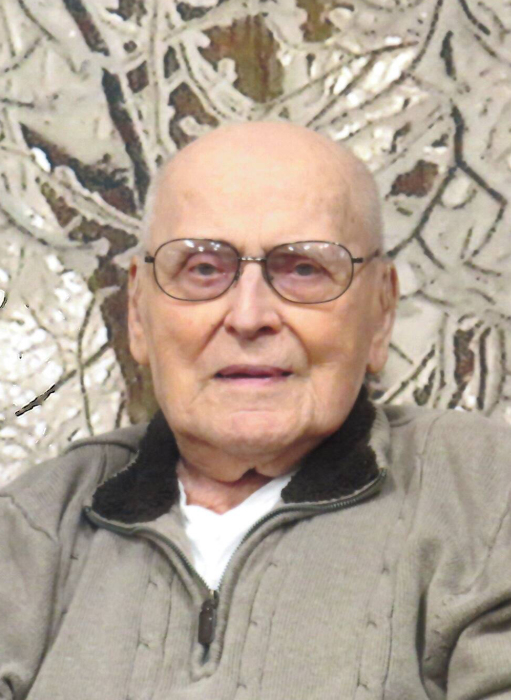 He was born on the family farm near Wolverton, MN on May 10, 1925 to Adolph and Amelia (Sovel) Kollar.  He served in the U.S. Army from 1945 to 1947.  Over the years, Ernie served his family, church, community, his employers and all he encountered.  When he took his position at Otter Tail Power Company he was encouraged as part of his job, to be involved with the community.  With this, Ernie went beyond expectations joining in church, school and organizations in every aspect of life in Casselton, ND, Perham and Fergus Falls where he lived with his wife Lottie and five children: LaVonne, Michael, Cynthia, Scott and Todd.

In attempting to write this obituary, the family was given a daunting task as Ernie was revered over the years with everyone he encountered and was involved with.  Ernie left public school early to begin his work career at a neighboring farm to provide financial support for his mother and family.  Ernie went on to hold numerous positions publicly and his work with Otter Tail Power Company for 43 years.  He was most proud of the mayor position he held with the City of Perham for 13 years.

Ernie’s wife, Lottie was stricken with Alzheimers/dementia for her final 14 years of life.  He was steadfast in his passionate care of her in their family home and finally in the care of the Cottages in Fergus Falls.  He was in adamant attendance by her side every morning and evening there.   Lottie passed away on August 31, 2010.

Ernie is survived by his five children, 12 grandchildren, 11 great-grandchildren and one sister, Marlys Klovstad.  He was preceded in death by his parents, his wife and five brothers, three sisters, a son-in-law, Kit Schwartzman and a grandchild, Daryn Schuelke.  The past three years of Ernie’s life were spent in his beloved Veteran’s Home in Fergus Falls.  Ernie was well loved there by all and took in all the activities he could.  He loved the chapel services, singing in the choir, music sessions, playing cards and bingo and the numerous outings they offered.  His favorite and final outing was this past summer when the choir attended a Twins game and sang at the game.  Although small in stature, his commitment to family and his community were huge and filled his family with pride.  May he rest in peace.  Job well done – you are loved by so many.

In lieu of flowers, Ernie would like to have donations made to the MN Veteran’s Home or to the charity of the donor’s choice.

To plant a beautiful memorial tree in memory of Ernie Kollar, please visit our Tree Store.

To order memorial trees or send flowers to the family in memory of Ernie Kollar, please visit our flower store.