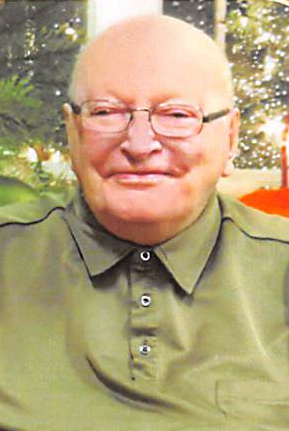 Erling Roger Halbakken was born on August 5, 1931 at St. Luke’s Hospital in Fergus Falls, MN, the son of Earl and Inga (Western) Halbakken.  He attended country school through the eighth grade and graduated from Rothsay High School.  Erling went on to attend technical school in Wahpeton for two years.

On June 20, 1953, Erling married Delores Overgaard at Bethel Church in Fergus Falls, and they were blessed with three children.

Erling was drafted into the United States Army on September 22, 1953.  He was stationed in Germany during the Korean conflict and was honorably discharged in September of 1955.  Following his military service, Erling and his family spent a year in Billings, Montana, where he worked as an auto mechanic, before returning to Rothsay to farm alongside his father.  During his farming years, Erling also worked for H & R Block, American Crystal Sugar in Moorhead, and owned Halbakken-Raw Construction.

Over the years, Erling was active in many organizations, including 4H and the Republican Party.  Erling was a member of Bethel Lutheran Church, where he served as a trustee and treasurer.

In addition to his parents, Erling is preceded in death by his wife, Delores; a grandson-in-law, Travis Pope; and a great-grandson, Thomas Rowlette.

Memorials are preferred to Bethel Lutheran Church or the Minnesota Veterans Home.

Funeral Service: 11 AM Friday, June 19, 2020, at Bethel Lutheran Church, Fergus Falls, with visitation one hour prior to services at the church.  For those unable to attend, a live stream will be available on Erling’s memorial page at www.GlendeNilson.com.

To order memorial trees or send flowers to the family in memory of Erling Halbakken, please visit our flower store.