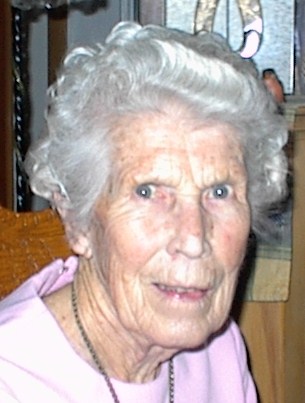 Eleanor Trana Hildreth, 97, a resident of Good Samaritan Home in Battle Lake and formerly of Henning, died on Wednesday, August 15, 2018.

Eleanor was born August 23, 1920, to Arnie Conrad & Clara (Youngberg) Baglo in Minneapolis, Minnesota.  After graduating High School in Fergus Falls, Minnesota in 1938, she moved to Henning to work for her Uncle Oscar Baglo in his restaurant (the Corner Cafe) where she met her first husband Marion Trana.  They were married in Grace Church on July 14, 1940.  This union was blessed with 4 children.  Eleanor was widowed in 1967.  Eleanor married Clifton Hildreth in Grace Church on November 15, 1975.  Eleanor was widowed again in 1987.  Eleanor had an active and busy life as homemaker (master baker), business woman (North Star Gas & Grocery in Henning), Grey Lady Volunteer (pinning hair for over 40 years), active member in her church, grandmother, great-grandmother and great-great-grandmother.  She was able to live alone in her home in Henning until she was 90 years old, when she fell and broke her hip and decided to make her home at Good Samaritan Home for her final years.  Eleanor demonstrated her strong faith and work ethic throughout her life.  She was noted for her gracious hospitality, and love for all those around her.

Visitation will be from 4 – 7 PM Sunday, with a 6:30 PM Prayer Service, at the Glende-Nilson Funeral Home in Battle Lake and resumes for an hour prior to the services at the church.

Interment will be in Grace Cemetery in Henning.

To order memorial trees or send flowers to the family in memory of Eleanor (Trana) Hildreth, please visit our flower store.