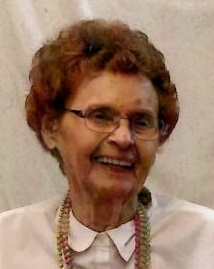 On May 17, 1947, she married Gordon E. Knutson at the First Lutheran parsonage in Battle Lake. After their marriage, they spent a short time in Wadena, then returned to the Ashby area where they farmed.

Donna enjoyed traveling with Gordon, cooking, baking, reading, sewing and crocheting. She made many beautiful blankets, afghans and doilies. Most of all Donna loved spending time with her family, especially her grandchildren!

She was a homemaker for most of her life, and spent many wonderful years in their Ashby home raising their family where she was a devoted daughter, sister, wife, mother and grandmother. She was a member of Peace Lutheran Church and was very kind and loving to everyone she met. After Gordon passed away, Donna moved to River Bend Apartments in Fergus Falls. In April 2018 she moved to Ashby Living Center where she resided until her death.

She was preceded in death by her husband, Gordon, her parents, a daughter, Barbara Dyrhaug, son-in-law, Curt Dyrhaug, grandson, Vaughn Thorstenson, brothers, Oris and Palmer Torgrimson and sisters Lois Knutson and Anola Amundson.

A Memorial Service will be held on Saturday, October 8, 2022 at 2:00PM at Glende Nilson Funeral Home in Ashby with visitation one hour prior to the service at the Funeral Home.

To order memorial trees or send flowers to the family in memory of Donna Knutson, please visit our flower store.
Folder Knutson.pdf
Open